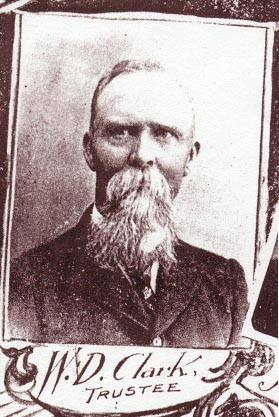 Among the several citizens of Redlands who had honorable records in the civil war, is W. D. Clark, at present one of the board of trustees.  Born in Dupage county, Ill., Mr. Clark lived in that state and in Minnesota until he enlisted, February, 1862, in Company F, of the Fifty-third Illinois Infantry.  He served through the war, being mustered out in March, 1865.  The hardest fighting that he saw was with Grant at Shiloh, Corinth, Hatchie River, and in the campaign on the Mississippi which ended with the surrender of Vicksburg, July 12, 1863.  The brigade in which Mr. Clark served was almost annihilated at Jackson, Miss., and he was twice wounded.  He had been wounded once before and this battle closed his active service.  He was then transferred to the eighth regiment of the Veteran Reserve Corps and spent the remainder of the war period in guarding prisoners at Fort Douglass, Chicago.

In 1867 Mr. Clark removed to Missouri, and there engaged in ranching until 1874, when he went into the grocery business at Appleton City, in which he remained for seventeen years and until he came to California.  He was in Redlands on a prospecting trip at the time the city was incorporated and came to remain in 1891.  He owns a fine thirty-acre orange grove on the corner of Church street and Colton avenue adjoining his new residence on the Terrace.  He has now entered upon his fourth year as a member of the board of trustees of the city.  He is also president of the Lugonia Water Company.  He has been twice married, in 1870 to Matilda Walker, of Newcastle, Ind., who died in Redlands in 1888, and in 1889 to Josephine Shryack, of Warrensburg, Mo.  A daughter by the first wife is now the wife of Rev. W. G. Palmer, a Presbyterian clergyman living in Minnesota, and the only child of the second marriage is a little boy living with his parents at Redlands.