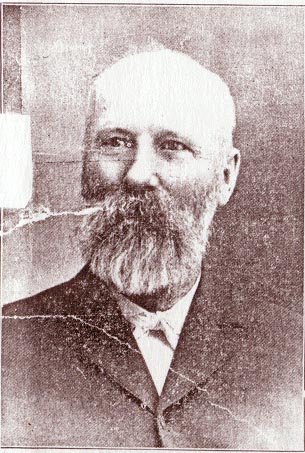 Among the very few people now residents of Redlands, who have watched the city grow from its very beginnings, is George A. Cook, who came to California first in 1876, to spy out the land, and two years later to settle in this valley.  Frank E. Brown was with the party that came first.  They stopped at Riverside, which had then been settled for a few years and then came into the country that is now Redlands.  At that time there was no business house between Colton and San Bernardino on the west and Yuma on the east.  But the members of this party were all so well pleased with the looks of the country that they decided it was the very best place for them to settle.  Mr. Brown remained and taught school in the San Timoteo Canyon.  Colonel Tolles had located in Lugonia a few years before, where he had taken up a section of land.  Mr. Cook purchased ten acres of him and commenced to grow apricots and peaches.  There were then no oranges nearer than the Barton ranch and Crafton.  As the fruit grew, the owners commenced to dry it.  The dryer attracted people from different sections, and Mr. Cook opened a general merchandise store, the first in the valley, at the dryer, in a building ten by sixteen feet.  This store was at first located about where Israel Beal’s ranch is at present.  It was soon moved to a point opposite to the house where Mr. Gernich lives now, east of the Lugonia School house.

Two years afterward Mr. Cook sold this little establishment and built a new and larger store on the present site of V. Mashek’s residence, opposite the Casa Loma Hotel.  This building (destroyed by a fire on April 3, 1892) was opened for business July 28, 1882, and enlarged four times in three years to meet the growing demands of commerce.  It afterwards contained the post office, and the First National Bank commenced business therein.  In 1885 Mr. Cook sold it to F. E. Brown, and B. O. Johnson was placed in charge.  Mr. Cook was the first postmaster of Lugonia, being appointed in 1882 and serving from Sept. 5 of that year for five years, when he was succeeded by C. H. Lathrop, who held the office until it was discontinued in 1887.  Mr. Cook was interested in the building of the Bear Valley dam, in 1884, and helped to lay out and incorporate the city of Redlands.  He was one of the first directors and is still a director of the First National Bank, and is also vice-president of the Redlands Savings bank.  In 1887 he helped to establish the Domestic Water Company with its extensive plant of reservoirs and pipelines which cost $300,000.  James F. Drake was the first president of this company, but was succeeded a year later by Mr. Cook, who has held the office ever since.  In fact, his principal occupation since 1887 has been looking after this fine property, which furnishes Redlands with the best and purest water to be found on the Pacific Coast.  Mr. Cook is also a director in the Redlands Water Company, which was incorporated October 27, 1881.