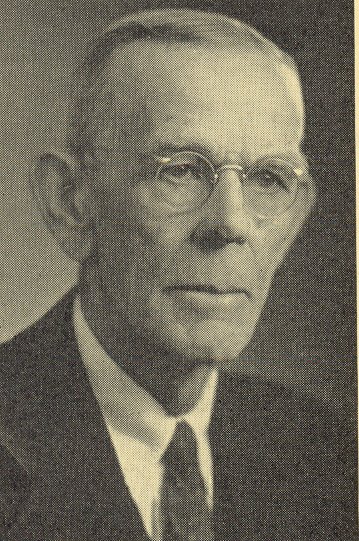 FROM breaking wild horses on a western cattle ranch and riding the range to the profession of undertaking seems a long way, but such is the life experience of Edward Everett Dow.

Born in Hill, N. H., on Oct. 20, 1864, he spent his childhood within sight of the beau­tiful White mountain range, roaming the hills and walking five miles to and from a little district school.

He preferred having fun to studying, with the exception of mathematics, for which he acquired an early liking, and this no doubt accounts for his being, today, an expert and highly technical player of contract bridge.

At the age of 13, he left New Hampshire and went to Hammond, Ind., to live with two married sisters, Mrs. Charles C. Smith and Mrs. Marcus M. Towle, whose husband origi­nated beef exports from the United States to England.

One sister ran a grocery store and supplied the families of men working in the Chicago stockyards. He assisted her in the store and attended high school and a small college in Valparaiso, Ind. There he played lots of baseball and his hands to this day bear evi­dence of many hot “flies” caught without benefit of glove.

When he was 20, his brothers-in-law went into the cattle business and he was sent out West to Indian territory, where he spent two years as cow-puncher on the open range. They went to southwest Kansas, bought large sections of railroad land, increased the stock, and the young man became an experienced rider and handler of horses.

Later he homesteaded 160 acres south of Lakin, in Kearny county, on his own, and raised alfalfa for the nearby stock ranchers.

He was married, on Jan. 16, 1890, to Kathryn Camp. His daughters, Jessie and Fern, (now Mrs. W. H. Pinckard) and son Everett, were born on the ranch. His younger son, Kenneth was born after the family ar­rived in Redlands.

It was through the influence of his uncle, G. M. Adams, of Pasadena, who came to visit him, that he decided to leave the ranch­ing business and go into that of undertaking. In 1899, he sold his holdings and brought his family to Los Angeles, where he associat­ed himself with the firm of Bresee Brothers for a year to learn the profession.

It is a feather in Redlands’ cap that he looked all over Southern California before de­ciding to set up for business in Redlands. On Nov. 25, 1900, he brought his fam­ily here, where he and his uncle bought out the Wessel establishment in what is now the south half of Fred C. Fowler’s clothing store.

Later, a new building was constructed for them on Citrus avenue. Then C. R. Vesper bought out Adams, and it was Vesper & Dow. In 1905, Vesper sold his share to M. H. Fitzsimmons and it became Dow & Fitz­simmons, moving in 1906, to the building now occupied at 259 Cajon street.

Dow is a charter member of Redlands lodge of Elks and the Knights of the Round Table. Other organizations to which he be­longs are the Modern Woodmen, Woodmen of the World, Fraterna1 Brotherhood, the Presbyterian church, Chamber of Commerce and Redlands Country club.

A charter member of the Senior Golf As­sociation of Southern California, he declares that golf is his “favorite pastime and doctor.” He likes real bridge, but also enjoys the con­versational variety. He is genial, socially ­minded and likes to see people around him enjoying themselves.

The family home is on Garden Street. Eve­rett is married, has one child and 1ives in Alameda. Fern and her husband have been in Bombay.