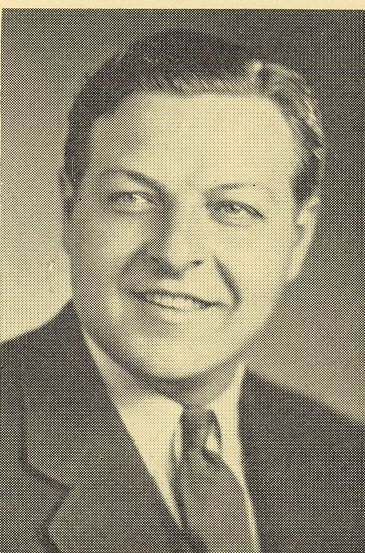 GLENN EMMERSON, amiable young funer­al director and Boy Scout executive, should know his Pacific coast, having resided in something like a dozen different communi­ties of California, Oregon and Washington.

Among his other distinctions: He gleaned his education from seven institutions, but dashed through the customary eight-year ele­mentary course in only seven years; he was the very first student in the Southern Cali­fornia Adventist academy at La Sierra Heights; his recently completed Little Chapel of the Palms was the first air-conditioned funeral parlor in the Southland; and he has more than 3,000 samples in his hobby col­lection of advertising pencils.

Only two years after his birth at Gaston, Ore., Oct. 29, 1909, his wanderings started. His father, R. F. Emmerson, had been run­ning a general mercantile business in Gas­ton, but he moved the family to nearby Forest Grove, another community 30 miles west of Portland, and started another store. When Mr. Emmerson sold his interests to F. W. Woolworth & Co., he had several stores in the same portion of Oregon.

Glenn had barely started to school at Forest Grove when the family moved to Col­lege Place, Wash,  where his father became business manager and purchasing agent of Walla Walla College, an Adventist institution that he had rebuilt while there.

It was his mother’s health that required the next shift. Glenn was 11 years old when the family came to Long Beach. There his father engaged in building, erecting numerous homes in the Cherry Avenue district.

Soon Glenn’s father became purchasing agent for the White Memorial and Loma Linda hospitals. They lived one year in Loma Linda, then R. F. Emmerson went to White Memorial hospital as business manager for that division of the College of Medical Evangelists.

Glenn was not quite 15 years old when he completed his primary education and went to La Sierra. Because his father was in charge of building the new academy, it was Glenn’s privilege to ride out from Los Angeles on a load of materials. Thus he was the first pupil to reach the new institution.

He had been at La Sierra only two years, however, when his father was transferred to Pacific Union college at Angwin, California. It was there that he was graduated from the academy and took a two-year premedical course, expecting to continue with a medical course at Loma Linda. In Loma Linda, however, the elder Mr. Emmerson established a market, in which Glenn acquired an interest.

Glenn was married on March 21, 1929, to Inez Kinch, of Riverside, whom he had known at La Sierra. The wedding was at the Little Church of the Flowers, Glendale. They have a daughter, Varlyne Inez Em­merson, who was born at Loma Linda hospital on June 13, 1933.

Glenn’s first experience in the undertaking profession was with the Mark B. Shaw Co., of San Bernardino, which he served as an ap­prentice. After two years there he affiliated in 1932 with the Stephens & Bobbitt estab­lishment. In 1934 he was graduated from the California College of Embalming, Los An­geles, then returned to Stephens & Bobbitt.

The beautiful Little Chapel of the Palms was built in Redlands in 1935, the investment totaling $45,000.

Mr. Emmerson is the newly reelected chair­man of the Redlands Boy Scout council. Also he is the chaplain of the Elks club and has membership in the Knights of Pythias, Kiwanis club, Commercial club and Y.M.C.A. He managed the Loma Linda night base­ball team which won the Redlands city cham­pionship in 1929. Ice skating is another of his delights.

He has been in the radio and communica­tions division of the United States naval re­serve.