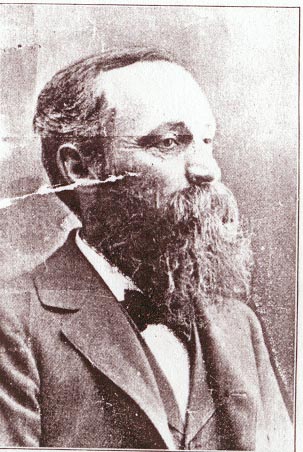 A native of Massachusetts, Professor Thomas E. N. Eaton passed his boyhood in New Hampshire; was graduated from Amherst College in 1868, and entered upon the profession of teaching.  Later, he took a three years’ course at Boston University, where he received the degree of Doctor of Philosophy in 1886.  His principal educational work was as Junior Professor of Pure Mathematics at the Polytechnic Institute at Worcester, Mass., where he taught for nineteen years.  Professor Eaton came west in 1888, but returned east after a year’s absence and remained until 1891, when he came to Redlands to reside.  His occupation here has been horticulture, his orchard holdings comprising 36 acres.  He has five acres of solid eucalyptus forest, an unusual thing in this section.  For two years he was president of the Sunnyside Water Company and is now president of the Redlands Water Company; was one of the first board of library trustees, and was elected trustee of the Grammar school in 1895, but resigned a few months ago.

In 1868, Professor Eaton was married to S. Adelaide Clapp of Montague, Mass.  Their son, George, now 24 years of age, is an engineer employed in constructing ships of war for the United States government at Newport News, VA.  Their daughter, Grace, is an enthusiastic student of botany, the father having had a free class in this science, of 60 ladies and gentlemen, before the High School was established in Redlands.  Professor Eaton’s father, Rev. J. M. R. Eaton, now 83 years of age has his home with him.  Rev. J. H. Williams, of this city was a classmate, and Professor C. R. Paine of Crafton, a collegemate, at Amherst.  Among the graduates of the Worcester Polytechnic, holding important positions in different parts of the country, are several on the Pacific Coast who were formerly among Professor Eaton’s pupils.