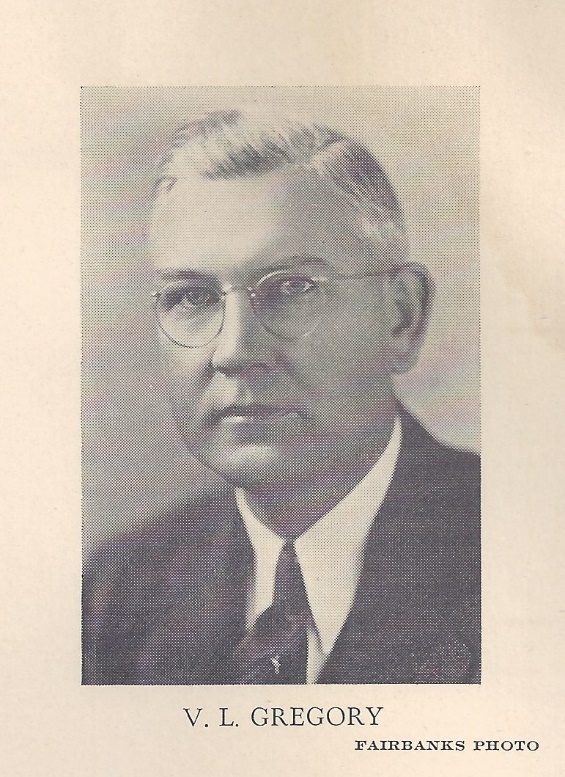 VINTON LYNWOOD GREGORY, secretary-manager of Orangedale Groves, Inc., and owner of the V.L. Gregory building at 200-214 Orange street, is a Redlands boy, born on E. Lugonia avenue, Dec. 2, 1894, in the home recently occupied by the late Capt. A. G. Johnson. When he was four, the family moved to Los Angeles, where he spent his boyhood, received his early education and went to Manual Arts high school.

In 1912, he returned to Redlands and entered the Redlands Business college, then located in the Hubbard building, where he studied stenography and bookkeeping.  His first job was with the Mutual Orange Distributors, as stenographer in the traffic department. In 1916 he became manager of the Marigold Dairy, holding that position for three years and leaving it, in 1919, to go to work for the Crafton-Mentone Heights Orange association at Crafton.  In 1922, he became affiliated with the Redlands Orangedale Groves association, for which organization he is at present secretary and manager.

He was married, in 1917, to Edythe Mae Truslow, daughter of W.A. Truslow and a graduate of RHS in the class of 1913.  Their children are Vinton, Jr., at present a member of the junior class at UCLA at Shirley a senior at RHS.

He is a member of the Elks club and the First Baptist Church.  He likes gardening and working around his house at 216 Grand View Drive and traveling.  In 1936, the family made a trip to Alaska and, in the summer of 1937, to Honolulu.  Three business and pleasure trips to the East have taken him into almost every state in the Union.

Although he claims to be a man without distinctions, the fact remains that he is the designer of a bulkhead that has been adopted by the Santa Fe system and incorporated in their general orders for loading refrigerator cars.  Also, he was the first packing house in the district to begin the practice (now general) of accounting to growers by size and grade of oranges.