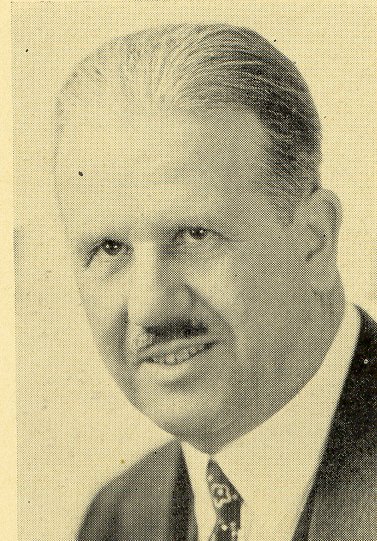 THOUGH BORN IN Wisconsin, Jeffry Joseph Prendergast has been so long a resident of California and so long associated with the life of Redlands that there are few who think of him as other than a native son of the Golden State. Born in DePere, Wis., on Aug. 31, 1875, where his father was a civil engineer engaged in railroad location work through the prairie states, he was not destined to remain long in the state of his birth.

In 1881 his parents moved to Newton, Mass., a suburb of Boston, where his elemen­tary school education was obtained. The rigorous New England winters became too much for his father’s health, so December, 1889, saw the Prendergast family settled in Chula Vista, San Diego county, California, where Jeffry attended San Diego high school while his father continued his profession of civil engineering. Retiring from active busi­ness life in 1893, his father once more sought a drier climate, hence the early months of that year found the Prendergasts residing in Red­lands on West Highland avenue, within a block of the present home of “Jeff” Prender­gast. It was in Redlands that he completed his high school career, graduating with the class of 1894.

After 2 ½  years’ training in civil engineer­ing at the University of California, Jeffry em­barked on a varied career that was to bring him much experience that was to prove valu­able to him in later life. His first job was a natural one for the son of a railroad engineer, in the maintenance-of-way department of the Santa Fe railroad in San Bernardino. After a year or two at this he spent four months with the Southern California Power Co., which later became the Southern California Edison Co., working at their Power House No. 1 in Santa Ana canyon. Then followed a short period with the San Diego water de­partment, and several years in a business ca­reer of his own in Redlands dealing in grain. Becoming interested in a mining claim in Nevada, he spent two years in Searchlight de­veloping it. After the erection of a stamp mill the property became quite a successful producer of gold.

The year 1907 saw Jeffry back in Redlands, where he served as secretary-treasurer of the Home Telephone Co., in association with C. A. Rolfe until 1915. Having in 1904 married Miss Mary Gill, of Redlands, daughter of a Chicago lawbook publisher and a sister of Mrs. Thomas Cornwall and Mrs. William Grigsby, this period saw the birth of his son Thomas in 1910.

As was becoming a true citizen of Red­lands, J. J. Prendergast next turned his at­tention to citrus growing and developed sev­eral orange properties, one of which, planted to Valencias, he still retains. Politics being something of a hobby with him, he served the city of Redlands as a councilman from 1908 to 1912, and the state of California as as­semblyman for two sessions, in 1921 and 1923, both of which offices he filled with busi­ness-like efficiency.

Upon the death of H. H. Garstin in 1929, “Jeff” Prendergast succeeded him as president and general manager of the Bear Valley Mu­tual Water Co. and the Bear Valley Develop­ment Co. Thousands of acres of oranges and hundreds of orange growers are dependent upon his efficient administering of this respon­sible position for their irrigation water, the life blood of a great industry. A director of the Gold Banner Orange association, Mr. Prendergast is also a Mason of longstanding, and a member of Redlands lodge No. 583, B. P. O. Elks.