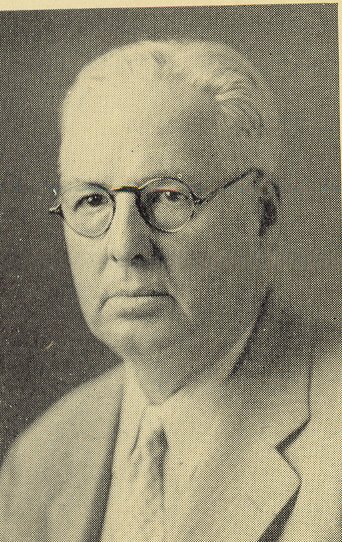 THIRTYFIVE years ago Burton E. Hales came to Redlands to die. Redlands cli­mate changed all that. Instead he engaged in various lines of endeavor and final1y resumed his practice of law, which a breakdown in health back in Ohio had forced him to give up. Burton Elon Hales was born in Lorain county, Ohio, Sept. 24, 1876. His father was a farmer and he grew to young manhood on a farm. He attended Oberlin academy and Oberlin college and attended law school at Ohio State university. At Elyria, Ohio, he first practiced law, until his health failed.

In the fall of 1903 Mr. Hales came to Redlands and bought the old Story ranch on West Pioneer Avenue. He had 40 acres, including 25 acres of oranges and 15 acres of apricots. Later the apricots were removed and replaced with citrus fruit. The original house on this property was one of the old Mormon houses. This Mr. Hales razed and built the house that stands there today.

On June 22, 1908, Mr. Hales met his Ohio sweetheart, Miss Medora L Cotton, at Yuma, Ariz., and they were married. Her home was in Toledo, Ohio. They made their first home on the West Pioneer Avenue property and it was here their son Edwin was born in 1910.

Mr. Hales has taken a keen interest in the citrus industry, and regardless of his other activities has been a continuous owner of cit­rus property, and is to this day. He recalls how certain interests tried to throttle the cit­rus industry in its earlier years, to their own gain; how there was a great wail and cry about planting of new groves and overdoing production, but he lived to see the growers of subsequent years make greater profits than ever before.

In 1906-07 Mr. Hales was Riverside mana­ger for the Orange Growers Cash association, which had its main office in Redlands. He used a horse and buggy first on this job and later a two-cylinder automobile. The automobile business was his next ven­ture. He went into partnership with B. G. Holmes in Redlands, and their firm was known as the Electric Vehicle Co., Inc. They built the Mission garage building located on Cajon, Vine and Fifth streets.

He was also associated with Fred A. Clark, of the Austin-Clark Co., in the real estate and insurance business for several years.

Having regained his health he resumed the practice of law in 1914 and had his office for 10 years over the Harris company store, mov­ing out the year before the store was de­stroyed by fire. Since then his office has been in the present location in the Hubbard build­ing.

The family home was at one time on the hill now occupied by the president’s home on the University of Redlands campus. This property was sold to become part of the new campus, and the family moved to 1023 Col­lege.

Attorney Hales was a member of the Knights of the Round Table until a year ago. He is a former member of the Odd Fellows Lodge of Redlands, also. Both Mr. and Mrs. Hales are staunch members of and workers in the First Baptist church.

The local man has seen great changes in Redlands during his sojourn here. He recalls the thousands of tourists who used to visit Redlands daily during the wintertime, com­ing on the excursions run out of Los Angeles. They were taken in great carry-alls drawn by four-horse teams, over Smiley Heights and to other local show places. Casa Loma hotel was a busy and popular place in those days.