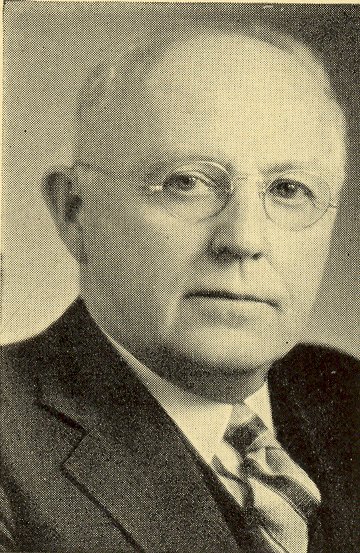 SENIOR physician of Redlands in time of service is Dr. Howard G. Hill, who came to this community as a small boy in 1887, received his early education in local schools, and has been engaged in the practice of medicine here since 1904. Dr. M. W. Hill, his father, was the first homeopathic physician to settle in Redlands, bringing his family here before the town was incorporated. Until his death in May, 1927, he was also one of the city’s leading physic­ians.

Keenly interested in educational matters, “Dr. M. W.,” as he was affectionately known to thousands, was for years an active member of the Redlands grammar school board. Later he was first to bring up the subject of a high school for this community and, as clerk of the board, most persistent in securing its establish­ment, his son entering with the first class.

Dr. Howard G. Hill was born in Water­bury, Vt., on April 17, 1876. Not only his father, but one grandfather and many rela­tives were physicians. Today two of his sons, Howard and Harold Hill, are preparing to carry on the family tradition.

Having attended Kingsbury grammar school and Redlands high school, Dr. Hill entered Stanford university, majored in physiology and was graduated with an A. B. degree in 1900. In 1903 he was graduated from the medical department of the University of Cali­fornia, having taught as laboratory instructor in physiology in the dental department mean­while. He is a member of Phi Delta Theta, national social, and Nu Sigma Nu, national medical, fraternities. Following graduation, he spent a year as interne at St. Luke’s hospital in San Francisco.

Returning to Redlands in 1904, he entered practice with his father in a building on Cajon street where the Fox theater now stands. Here father and son engaged in their profes­sion for many years, until the elder doctor’s death in 1927 terminated their association. Upon the completion of the Medical Arts building, Dr. Hill established his present office there.

He is a fellow of the American College of Surgeons, a member of the American Medical association, the California Medical association, the San Bernardino County Medical society, of which he has served as president, a mem­ber of the Los Angeles Obstetrical and Gyne­cological society and serves as chief of obstet­rics on the staff of the San Bernardino County hospital.

Much interested in Y. M. C. A. work, he has served for 20 years on the board of direc­tors and was president during the World war. During the war, he served as medical officer of the University of Redlands unit of the S. A T. C. He is a member of the Redlands post of the American Legion and of Redlands Lodge No. 300, F. and A.M.

A director of the old Redlands hospital on Nordina street and chairman of the nurses’ training school during its existence, he was prominent in establishing the Redlands Com­munity hospital, the obstetrical department and nursery being a memorial to his father, and he has been connected with it and has served on the staff since its inception.

He has been a member of the First Congregational church since the present edifice was constructed and has the distinction of being a charter member of the Epworth League in Redlands, having assisted in its organization many years ago in the old Windsor hotel.

In London, England, on June 25, 1914, Dr. Hill was married to Miss Minnie Arth, daugh­ter of the late Peter Arth, Redlands pioneer. Mrs. Hill passed away in 1922. Their children are Howard Arth, who graduated from the University of Redlands and is now engaged in pre-medic work at Stanford; Ruth Gail, a junior at University of California; Harold Merrill, a pre-medic student at U. of R.; and Herbert O., who is attending school in the East.

On Sept. 4, 1926, Dr. Hill was married to Miss Mildred Sykes, of Los Angeles. Their home is at 329 Summit avenue. Their three small daughters, Mildred Jean, Shirley Sykes and Ethel Emily, are students at Kingsbury grammar school, situated on the same site where their father attended, years ago, a little one-room school.