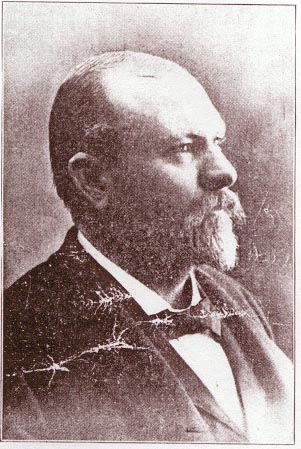 Born in Northern Wisconsin in 1847, A.G. Hubbard acquired in his youth a knowledge of chemistry, metallurgy and mining engineering.  He started to cross the plains in 1865, riding on horseback from the Missouri river to the City of Mexico and back through Texas to the Pacific coast, which he reached in the fall of l867.  He took charge of a copper mine for an English company in l868.  He followed mining in the capacity of superintendent of mines and reduction works and doing expert work, reporting on prospects in Arizona, California, New Mexico and old Mexico, until he had accumulated money enough to engage in mining for himself, which occupation he followed until l893.  On one of his vacations from mining in 1878, Mr. Hubbard visited this valley, his object being to build a flume to carry lumber from the San Bernardino mountains to the valley, the arrangement between Mr. Hubbard and his three associates being that each would put up $100,000 to carry out the enterprise.  On investigation Mr. Hubbard found that all the waters had already been appropriated and were in the hands of the Bear Valley Company.  Therefore Mr. Hubbard reported against the proposition, but was so much impressed with the beauty of the valley and its probable future that he invested about $150,000 in real estate on his own account, prophesying then that a great deal of money could be made in Redlands in growing oranges on account of the immunity from frost and from insect pests, but his love of mining made it impossible for him to change his modes of life entirely and to study an occupation entirely new to him, when he had spent a lifetime in the study of mines and mining engineering.  Therefore, although leaving all of his investments here, not putting an acre upon the market, he went back to his old occupation, winding up with the purchase, development and sale of the Harqua Hala bonanza in Arizona, which he and his old mining partner, George W. Bowers, with whom he had been associated for a number of years, opened up at an expense of $273,000–a property from which they took over $1,100,000 and then sold to an English syndicate for $1,250,000.

Retiring from active mining life, Mr. Hubbard, not thinking it likely that he would be satisfied to spend the remainder of his days in Redlands, told his wife that before building a permanent home it would be advisable to travel for a year or two.  After two years of travel, taking in the entire United States, Mexico and the islands of the gulf, a month after his return to Redlands he had specifications drawn and men at work demolishing the old Terrace Villa, one of his early investments, and transforming it into a comfortable country house.  Mr. Hubbard spent his first night in Redlands in that old hostelry when it was but partly opened, and has retained the name for his present home.