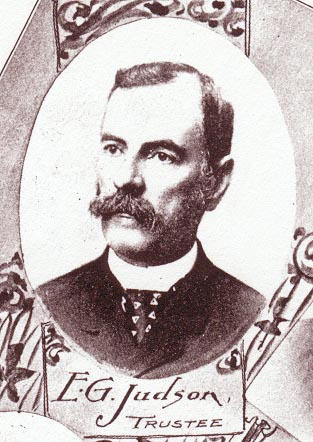 Edward G. Judson is a native of Bridgeport, Conn., and was educated in that city, Stratford, Conn., and Amherst, Mass. For twelve years before coming to Redlands he was engaged in a brokerage business in New York City. In March, 1877, Frank E. Brown, a civil engineer and a graduate of the Sheffield Scientific School, located in Redlands and met Mr. Judson immediately on his arrival.  These two were afterwards and for several years associated in developing what is now the city of Redlands.  They had confidence that a large acreage then lying barren and idle could be brought under irrigation and made productive.  The first active steps were taken in 1881, the preliminary map of Redlands being filed in November of that year, and the first lot being sold to Charles A. Smith, December 6.  Mr. Judson took up a quarter section of land in what is now known as the Residence Tract, as a government claim, and, in company with Mr. Brown and others, purchased other sections from the railroad company and from former settlers in the valley.  They acquired water rights, dug canals and built reservoirs.  They brought irrigation to points which had hitherto been considered impossible.

These efforts were the commencement of the series of achievements which resulted in the present city of Redlands, and in the planting and development of its thousands of acres of surrounding orange groves.  As time passed these enterprises became too numerous and too extensive for Judson & Brown to handle alone, but these gentlemen deserve credit for the enthusiasm, the foresight and the energy which set the train of events in motion.

In the fall of 1888 Redlands was incorporated, and, November 26 of that year, the first election was held and Mr. Judson was one of the trustees elected for the first board.  He served on this board as its president nearly six years, and has been a member of the board of trustees of the Redlands public library since it was organized.  Mr. Judson also served for about two yeas as secretary of the Redlands Chamber of Commerce and has been a director from its commencement.  He has been president or secretary of may water companies and similar enterprises and is at the present time a director in the Southern California Power Company.  Of recent years Mr. Judson has been engaged in the sale of real estate and in looking after his orange grove, and other property interests in the city, where, at the corner of Center Street and Highland Avenue, he has a very tasty and attractive home.