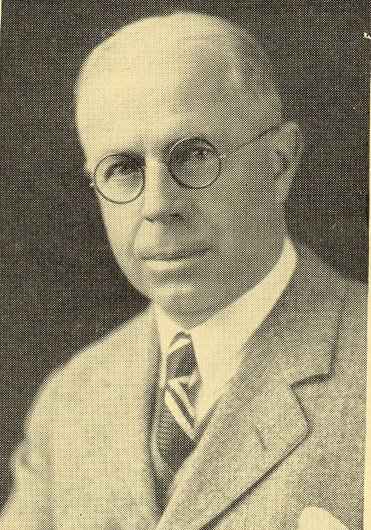 OFFICIAL intepreter of legislative matters in the city is Lyman M. King, president of the Redlands Federal Savings & Loan as­sociation. The section’s leading Republican, a former state senator, and one of the community’s most prominent citizens, Mr. King came to Redlands as a newspaperman in 1904.

He was born in Clark County, Iowa, but came to California as a small child and grew up in Napa. After graduation from Napa college – later to merge with the College of the Pacific – he got a job on the Napa Daily Register as reporter at $10 a week. His first “big story” was an explosion of steam boilers on a ferry boat lying by the wharf at Vallejo. All the San Francisco papers had reporters on the scene, yet Mr. King’s list of identified dead contained one name more than any of the large dailies. This was a triumph.

Moving south from Napa, Mr. King lived in Pasadena for five years. During this time he was city editor of the Pasadena Daily Star. In 1904 he came to Redlands, bought the Redlands Daily Review (a morning paper) from W. E. Willis, and organized the Review Publishing Co. Other stockholders were Mrs. King (the former Marion Grigsby), W. E. Grigsby and A. E. Brock.

A few years later Mr. King bought a con­trolling interest in the Redlands Daily Facts and the two papers were issued from the Facts office. Later still he sold the Review to Edgar Williams and became editor of the Facts. In this capacity he served until 1929, when he sold his interest to Paul W. Moore.

At that time he purchased the interest of W. T. Bill in the Redlands Building-Loan As­sociation and assumed the office of president. On March 25, 1937, the association federal­ized and became known as the Redlands Federal Savings & Loan association, with its ac­counts insured. Mr. King continues as presi­dent and manager.

Politically, Mr. King’s career dates from 1910, when he had charge of the U. S. census in this district, which then extended from the Mexican line on the south to include Tu­lare, Kern and Ventura counties on the north, excepting Los Angeles County. In 1919 he ran for the state senate and was elected, serving two terms, 1919-1923. The district consisted of San Bernardino and Inyo counties.

While at Sacramento, he was chairman of the revenue and taxation committee of the state senate and wrote the “King tax bill,” adopted by the legislature after a memorable contest, putting into operation in California the theory that individuals and corporations (utilities) should pay the same rate of taxa­(utilities) should pay the same taxation rate. In 1927, he became a member of the state board of control by appointment of the governor. This office was ex-officio with chief of the division of service and supply in the de­partment of finance. Later Mr. King was made director of fi­nance and served in this capacity until the conclusion of Governor Young’s term, ending Jan. 5, 1931.

At present, through pressure of business, Mr. King’s political activities are confined to very narrow limits. Until recently, his col­umn “Day by Day–a Transient Record of Individual Opinion” was eagerly watched for and enjoyed by Facts readers.

Mr. King belongs to the Country club and likes to play golf. Long a member of the board of trustees of the A. K. Smiley public library, he has also served as president of the Chamber of Commerce and in innumerable other local civic capacities.

Mr. and Mrs. King, who make their home on Knoll Road, are the parents of Karolyn K. (Mrs. James C. G.) Lewis, of 1021 West Highland avenue, and Lyman M. King, Jr., residing at 907 Walnut avenue, Redlands. The latter is associated with his father as vice-president of the Redlands Federal Sav­ings & Loan Association.