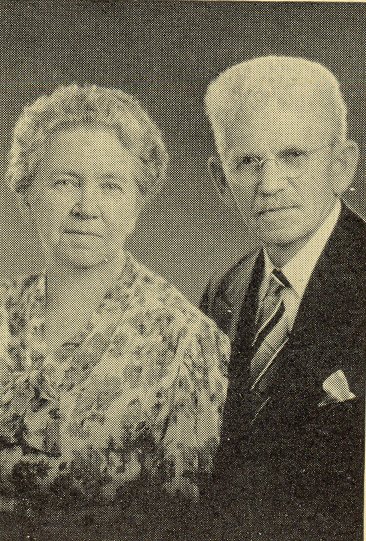 MR.AND MRS. WALTER J. S. LYNN, of 135 East Pearl Avenue, celebrated this year the fiftieth anniversary of their wedding. It is two years more than fifty since Mr. Lynn came to be one of the pioneer settlers of Red­lands. Though but a lad in his early twenties at the time, his interest at once became intense in the development of the colony. Bringing with him a four-year training and experience in the building line, he was one of the first to have a hand in construction of many of the first buildings erected in the new town. It has been in connection with the building of Redlands that his work has been through the years. As a contractor, as an inside fin­isher, as foreman for other contractors, and of late years, in cabinet work, he has become known as an artist in wood-working.

A picture of his pioneer Canadian home in inlaid work, brought out in detail by different types of wood, has recently been on exhibition in the showcase of the Smiley Public Library. Of Scotch and Scotch-Irish parentage, in a pioneer log-cabin home in what was then the backwoods country of Ontario, Canada, he was born on June 8, 1862. He was raised under the strictest Presbyterian rules of relig­ious industry and economy. Work on the farm, as he was a growing boy, was varied with irregular attendance at the district school, at times when the home farm work was not too pressing.

But it was not in farm work that his heart’s desire lay. He longed for training in work of a mechanical nature. At the age of 19, he persuaded his father to consent to his leaving home and starting on his own. He went to Rochester, N. Y., 200 miles from his Canad­ian home, and there remained for more than three years, learning the carpenter trade. He received at the first $4.50 a week and paid $3.50 for room and board. Advancing pay came later.

Feeling the “lure of the West,” he decided to strike out for the Pacific coast to try his fortune. Arriving in Redding, Calif., in the spring of 1885, he and his brother remained there for a few months. Seeking a place more to their liking, they came to Redlands early in 1886, and decided to remain here and grow lip with the town.

Mr. Lynn’s first work in Redlands was a few days of gardening and ranch work for F. P. Morrison. This was followed by the building of a barn and an adobe house for Frank T. Nelson, his first construction work in this city. This adobe, at 226 East Cypress avenue, is still in use. Other houses put up by him that same year are still doing service.

As one of the contracting firm of “Lynn & Lynn, Builders,” he took an active part in the construction of many of the best buildings erected during the years 1887 and 1888. Later years brought building activities in con­nection with the more modern buildings of the present day.

It was in 1888 that Mr. Lynn made a trip back to Rochester, N. Y., and brought from there as his bride, the former Miss Jessie A. Lynn of that city. They were married on July 10, 1888, in Rochester, where Mrs. Lynn, spent most of her girlhood, though she was born in Pennsylvania. She obtained her edu­cation in Rochester and was a teacher in the public schools there. Of sturdy Scotch-Irish ancestry, her people were Scotch Covenanters of the strict old type.

Coming direct to Redlands, the Lynns es­tablished their first home in a newly built house on the site of the present A. K. Smiley library. It was here their son, E. Roy Lynn, now engaged in government mail service in Los Angeles, was born. This house still stands on Eureka street, where it was moved to make way for the library. They also have a. daughter, Mrs. Helen Lynn Patterson, living at present at Goleta, near Santa Barbara. Mrs. Patterson is the mother of the Lynns’ twin granddaughters, Joy and Hope, aged 6 years.

Owner of a considerable tract of unim­proved property in the Yucaipa valley, Mr. Lynn established his home there in 1910 in order to farm this land. Unpromising condi­tions, together with an accident, brought him back to Redlands in 1920 and to further building operations here, with an intermission of three years of building work in Los Angeles.

Mr. and Mrs. Lynn have been active Presbyterians all through the years. Both of their children are graduates of the Los Angeles Bible Institute as well as the Redlands schools, and both are intensely interested and active in missionary and other Christian work.