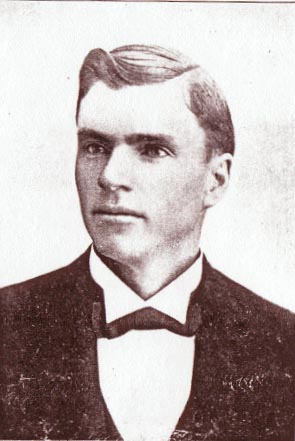 E. I. Martin, a prominent nurseryman of Redlands and vicinity, was born in Page county, Iowa, April 4, 1869. He was educated in the common schools and at a normal college, and commenced his business career in the spring of 1887 at Shenandoah, Iowa, as a member of the firm of Martin & Welch, nurserymen. These gentlemen rapidly increased the business that they founded, and in 1891 bought out the stock and good will of the Mount Arbor Nursery, which was at that time the third largest in Iowa.  A year later, on account of failing health, Mr. Martin decided to change his residence, left Iowa, and came to California in 1892 after looking over Kansas and Colorado.  He visited all sections of the state, north and south, including Los Angeles, Pasadena, and Riverside, and finally decided upon Redlands as his future home.  Soon after his arrival, in January, 1893, he commenced to prepare his nurseries, making a specialty of citrus stock and deciduous fruit trees.  The following spring he opened a yard in the city, near the Facts office, on State street.

Mr. Martin now has nurseries at Lugonia Park and on the Barton and Williams tracts in Redlands, also at Crafton and Moreno.  At the present time his is planting still another, on Olive street, near Terracina.  He does a large wholesale business in shipping trees and cuttings out of town, and makes almost daily shipments to the northern part of the state during the shipping season.  He also sends large consignments to Mexico and Florida and some trees to Japan.  He has made a specialty of shipping stock long distances.  One shipment sent to Mexico was delayed and had to go by slow methods of transportation, and was therefore six weeks on the road.  But the trees arrived in good condition and were satisfactory.  This experience was the more remarkable because the trees were orange stock and were shipped in August.  A shipment of orange seed bed stock sent to Florida was twenty-two days on the road, but the purchases wrote that they looked on arrival as though they had just been taken from the bed.  These and similar orders, successfully filled under the disadvantage of long distances, have resulted in a marked increase in Mr. Martin’s mail-order business.

Mr. Martin was active in politics during the recent campaign, and served as a member of the executive committee and also as treasurer of the Redlands Bryan Club, and as secretary of the county central committee of the People’s party.  He is a member of several of the local social organizations, and is vice-chief ranger of the Foresters.

An extensive advertiser, Mr. Martin believes in pushing his business, and in doing so has established a good and growing business in a remarkable short space of time.  He requires a stenographer to look after the correspondence involved in his mail-order department during the busy season, and issues an annual catalogue.  In the winter he requires some twenty assistants and half that number all the year.