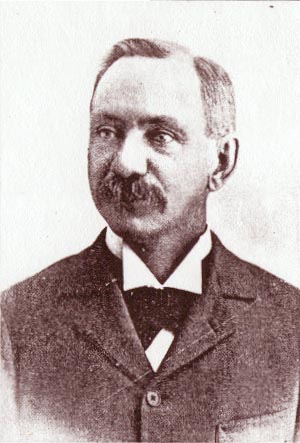 Born in Maine, August 20, 1849, M. M. Phinney was educated in the common schools, the Lewiston Falls Academy and the Edward Little Commercial School.  His business career commenced at the age of nineteen, when he became an employee of Goodard & Paul, dry goods merchants, with whom he remained for eleven years.  At Norway, Maine, he built a store and engaged in the same business on his own account.  After six years, during which he was fairly successful, Mr. Phinney removed to Lewiston, Maine, built a home and determined to settle down.  But the California fever seized him three years later and he came to this coast on a pleasure trip.  He returned east and remained two years longer and then shipped his household effects to Redlands and brought his family here, September 1890.  They have since resided upon their ten-acre orange ranch, which Mr. Phinney believes to be “as good as there is in town.”  December 23, 1873, Mr. Phinney was married to Miss Hannah Wakefield, a daughter of the late Archibald Wakefield, a prominent citizen of Lewiston, Maine.  They have two boys and two girls, all of whom are living in Redlands.  Mr. Phinney is among the enthusiastic lovers of his adopted state, and has no desire to live again at the other extreme of this broad land of ours.