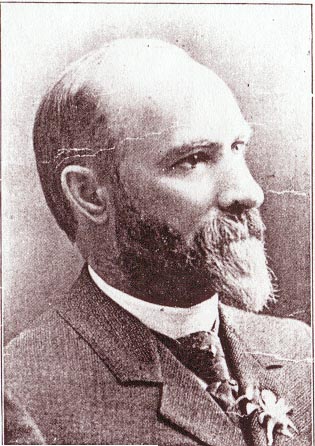 Truman Reeves, treasurer and tax collector of San Bernardino county, was born August 17, 1840, at Chardon, Geauga county, Ohio.  He was a farmer boy until 1858, when he took up the trade of watchmaker.  In 1861 he enlisted in the 6th Ohio volunteer cavalry for three years, and re-enlisted in January, 1864, to serve during the war.  January 5, 1865, he was discharged from service, having lost his left arm from a wound received at the battle of Cold Harbor, Virginia.  Mr. Reeves enlisted as a private, but returned to Ohio as a second lieutenant and brevet first lieutenant.  After his return he held several honorable positions in Ashtabula County, Ohio, and in 1875 he came to San Bernardino, where he carried on a jewelry business for fourteen years.

In 1883 he purchased ten acres of land in what was then Lugonia, and is now a part of Redlands.  The same year he planted this land to oranges, peaches and apricots, and, afterward, having the greater confidence in oranges, he replaced the other fruits with orange trees.  Upon this land, in 1890, Mr. Reeves built a house, the middle part of which was the first school house in Lugonia, and was erected in October, 1877.

Between 1882 and 1885, Mr. Reeves served two terms in the legislature of California.  The first term he was the only republican member elected from Southern California.  The second term he had two republican companions, from Los Angeles.  In 1890 he took the recorded indebtedness of the Seventh Congressional District, for the United States census.  In November, 1890, he was elected county treasurer, and has held the office continuously since the first Tuesday in January, 1891; the duties of tax collector having been added to the duties of treasurer.

Mr. Reeves is an Odd Fellow, a member of the order of Chosen Friends, and of the G.A.R.  He is a member of the Congregational church.  He was married in 1867 to Miss M. E. McConkey, of Oberlin, Ohio.  They have two children, Clarence H., a missionary in China, and Clara Bell, who is living at home.