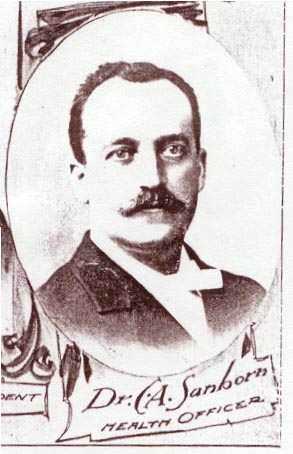 Dr. C. A. Sanborn was born at Newport, N. H., April 5, 1855, and received his preliminary education in public and select schools at that place and at the Hudson River Institute, located at Claverack, N. Y.  His professional training was received at the medical department of Bowdoin University and at Bellevue Hospital Medical College in New York City.  Graduating from the latter in 1882 he took a complete course in the New York Post-graduate Medical School, and, in 1894, took a second special course, and, in 1897, a third course, at the same institution.  Until 1888 Dr. Sanborn was engaged in practice at Newport, and in that year he came to Redlands, where he has been actively employed in his profession ever since.

He served for two years as secretary of the first board of health of Redlands, which was organized in 1889.  In 1892, in partnership with F. P. Meserve, Dr. Sanborn built the Sanborn-Meserve block, one of the best business blocks on Orange street.  He is a retired member of the New Hampshire Medical Society, and a member of the Southern California Medical Society, emergency surgeon for the Southern Pacific Railroad, and member of and examiner for a number of fraternal societies, and several of the leading old line insurance companies.  Dr. Sanborn was a member of the International Medical Congress held at Washington, D. C., in 1887, and is a member of the American Medical Association.  Mrs. Sanborn was, before her marriage, Miss Mary Braman Mudge, a native of Danvers, Mass., where they were married in 1885.  They have three children.