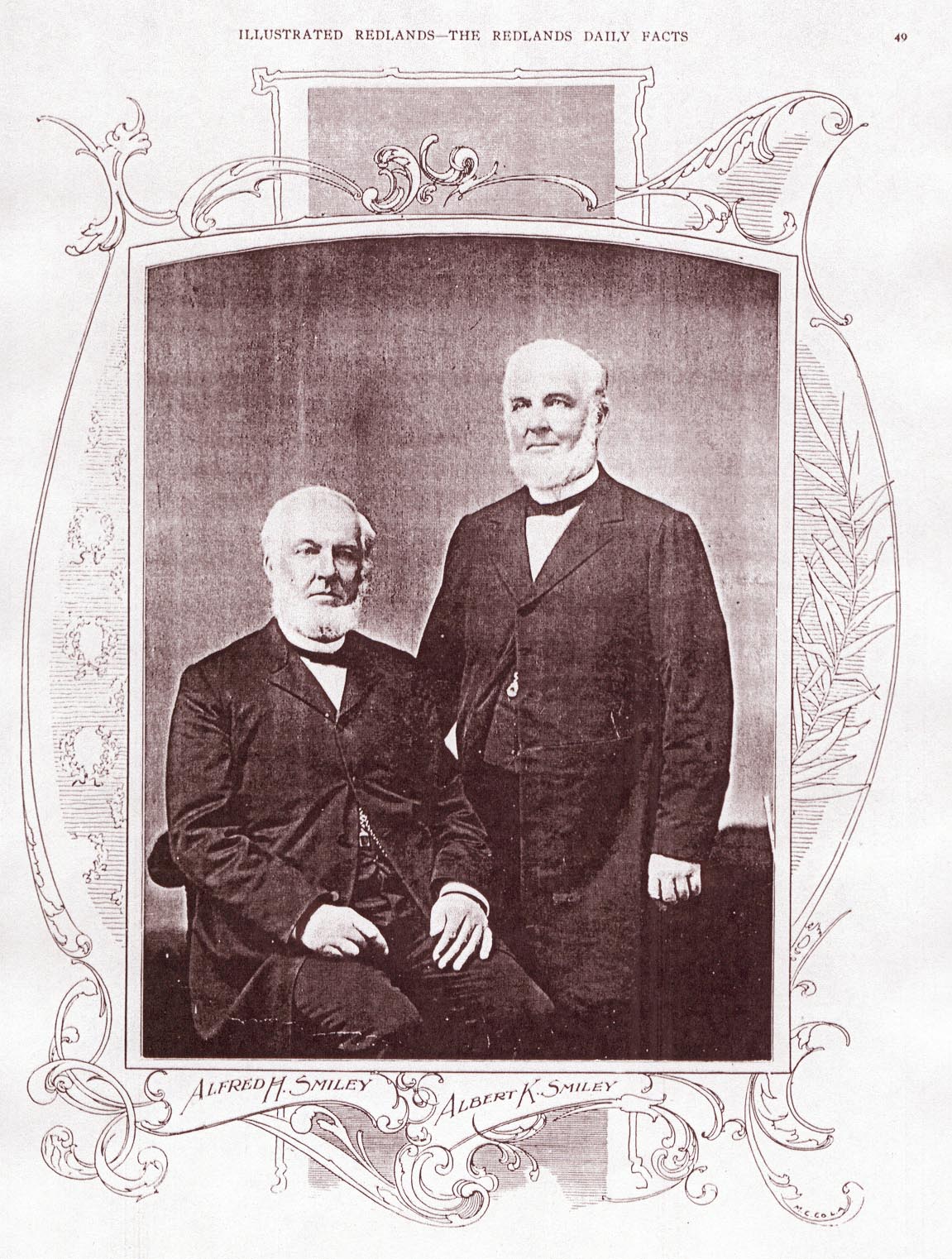 Alfred H. and Albert K. Smiley, twin brothers, with such a close resemblance to each other in form, feature and manner, that is often hard to tell one from the other, were born at Vassalboro, Me., March 17, 1828.  They were educated in the Academy in their native town and in the Friend’s School, at Providence, R. I.  In 1849 they graduated from Haverford College, Philadelphia, which also subsequently granted to both the degree of A. M.  They were engaged in educational work for thirty years, first in Haverford College, where they had charge of the English department for three years, subsequently founding an English and Classical Academy at Philadelphia, which was continued for four years and after this Alfred H. Smiley was principal of the high school at Oskaloosa, Iowa, and general superintendent of schools in that city.  Meantime Albert K. Smiley had charge of Oak Grove Seminary, in his native town, and from 1860 to 1879 he was head master of the Friend’s School at Providence, R. I., which, under his management and that of his brother, Alfred H. Smiley, who was associated with him equally in the conduct of the school, became one of the foremost of New England’s fitting schools.

In 1869 Alberrt K. visited Lake Mohonk and was so well pleased with the beauty and picturesqueness of the spot that he concluded to obtain possession for a summer home for himself and also for the purpose of establishing a summer resort there.  He at once purchased the lake, together with three hundred acres of land, and has made of it a most unique resort.  He has added to his possessions year by year, until the estate consists of upwards of 3,500 acres, extending along the crest of the mountains about six miles, with an average width of nearly one mile, over and through which he has had constructed about forty miles of private roads, together with 25 miles of walks.  For the first ten years the property was managed by Alfred H. Smiley, who, in 1875, had purchased Minnewaska, a twin lake with more than 2,500 acres of land seven miles distant, on the top of another spur of the Adirondacs, where he has built two fine hotels, capable of accommodating 450 guests, which he conducts on the same moral and social plan as doest Albert K.  In fact it would appear that these two brothers are as nearly alike in disposition and aims in life as they are in appearance.

Contrary to the usually accepted opinion concerning educators, the two brothers in the management of these properties have proved themselves not less successful than they had been as teachers.  Nevertheless, despite their success in their new line of work, they have not failed to exert a continuous and important influence in educational affairs.  For more than twenty years Albert K. has been a trustee of Brown University, from which institution he also received the degree of A. M.  Eleven years ago he was appointed one of the original board of trustees of Bryn Mawr College.  He has been president of the board of trustees of the New York State Normal School at New Paltz, N.Y., from its foundation, and largely to his experience is due the shaping of the course of study therein pursued.

In 1889 the two brothers came to California.  They were so much impressed with the beautiful scenery and surroundings of Redlands that they purchased for a winter home 200 acres of the heights south of the town, through which they had laid at once a beautiful series of roads both for driving and walking, and have planted on the summit and along the northern declivities upward of a thousand species of rare plants and flowers of such varieties as flourish in this semi-tropical climate.  Each has a substantial residence on the crest of the hill, and the whole place is a veritable Eden.  It is known as Cañon Crest Park, and is at all times open to visitors to pass through and enjoy its beauties.  Although planting was commenced only in April, 1890, its present appearance leads eastern visitors to suppose that is must have taken at least twenty years to attain its surprising growth.  This park has already become famous throughout the length and breadth of the land, and thousands of eastern tourists visit it annually.

Albert K. has also purchased about sixteen acres of land in the heart of the city, which has been laid out for park purposes, and on August 6 the foundation for a building (a description of which is found in another column) was begun for a Memorial Library Building.  It is expected to be completed by April, 1898.  This building when finished, together with the park, he expects to present to the city.

In 1896 Alfred H. Smiley laid out a beautiful summer resort know as Fredalba Park, near the summit of the mountain range north of Redlands, at an elevation of 5,500 feet.  One hundred and sixty acres of land have been cleared of underbrush, attractive grounds laid out, some six miles of road built and water piped to the grounds, on  which are erected fourteen commodious cottages, together with a large dining room and kitchen.  Many of Redlands’ citizens pass the summer months at this near-by resort, which is easy of access by good wagon road.

Albert K. Smiley’s career has not been exclusively confined to local, educational and business interests.  On the contrary he has a national reputation as a friend of the Indian and the Negro, and as one of the foremost champions of international peace.  It is in the sessions of the Lake Mohonk Indian Conference that, practically, all the reforms in the treatment of the Indians have originated.  This conference has met fourteen times in as many years.

During the administration of Gen. Grant and at his suggestion, a law was passed by Congress creating a board of Indian Commissioners, not exceeding ten in number, to be appointed by the President, to serve without compensation and at the will of the President, to be men “eminent for their intelligence and philanthrophy.”  They are to have coordinate power over Indian affairs with the Secretary of the Interior, and to supervise all purchases of Indian supplies, have power to inspect the whole Indian service, and endeavor to remove all corrupt practices which had previously prevailed.

In 1879 President Hayes appointed Mr. Smiley as a member of this board.  At the annual meeting of the board in Washington all the different religious societies, having dealings with Indians, met with them and reported on the condition of the Indians under their charge.  Mr. Smiley noticed the great diversity of opinion and practice prevailing amongst the various societies and devised a plan to correct this.  In the summer of 1883 he sent out hundreds of invitations to prominent friends of the Indian to meet at “Lake Mohonk House” in October and spend four days in discussing the Indian problem, and try to unite all the Indian workers on a common platform.  He invited the Board of Indian Commissioners, all secretaries of religious societies , the Senate and House Committees on Indian Affairs, army officers having dealing with the Indian, all prominent members of the Indian Bureau, the Indian Rights Association, Woman’s National Indian Association, heads of Indian schools, editors of leading papers, and prominent men all over the country.  From one hundred to two hundred and fifty such men have met in conference yearly since that time, and each year have remained four days, and have been entertained by Mr. And Mrs. Smiley purely as private guests.  To this consecrated spot the worthy host and hostess have for more than a dozen years summoned many of the wisest reform leaders of the country to confer upon the duty of the United States to the Indian.  The  results of these gathering have been revolutionary.  Congress has learned to heed and follow the advice of the little band, which assembles every October on this mountain-top in Ulster county, N.Y., and no future historian will be able to write the story of the last two decades of our century without assigning one of the noblest chapters to the Lake Mohonk Indian Conference.  For the cause of mercy toward and the advancement of the Indian, Mr. Smiley contributes some thousands of dollars annually.  He has served in various capacities in connection with the care of the Indians.

In the spring of 1889 Congress passed a law creating a commission of three men, who were to select reservations for the Mission Indians of Southern California.  The Secretary of the Interior appointed Mr. Smiley as chairman of this commission.  During the ensuing two years about forty reservations were selected, which were approved by the President and Secretary of the Interior, and thus three thousand Indians who were being despoiled of their rightful possessions, were placed upon suitable lands, secured to them for a permanent home.  In the spring of 1895 a bill was about to be passed by Congress uniting the two bands of Indians in Western Nevada.  The Walker River Indians and the Pyramid Lake Indians, each band being about one thousand in number.  The Secretary of the Interior asked the Board of Indian Commissioners to send one or more of their number to investigate the whole matter.  The Board appointed Mr. Smiley for this service.  He found the scheme a most iniquitous one, which, if consummated, would cost the United States government at least half a million dollars and would deprive two thousand Indians of their guaranteed rights and forever pauperize them, all in the interest of a railroad corporation.  The exposure of this scheme will probably prevent the passage of the bill.

Mr. Smiley has, during the past sixteen years, spent much time in inspecting the Indian Bureau at Washington, and visiting officially the various Indian schools at Carlisle, Hampton, Lawrence, etc., and in visiting numerous agencies in California, Arizona, New Mexico and Dakota.  He was chairman of a committee of the Board of Indian Commissioners, to investigate charges preferred against the Commissioner of Indian Affairs and two other high officials, one an Indian inspector and the other an agent.  The charges were sustained and all three officers were removed.

In 1880, the Secretary of the Interior requested the Board of Indian Commissioners to investigate the whole Indian Bureau, and suggest changes in its practical workings, and Mr. Smiley was also made chairman of this committee.

In the years of 1890 and 1891, following somewhat the same general plan as the Indian conferences, for two years Mr. Smiley invited to Mohonk, as his guests, two hundred or more philanthropists of this country, particularly those from the South, for a three days discussion, with the object of uniting both the North and the South in some concerted plan for the benefit of the Negro race. President Hayes presided at both these conferences.

In June, 1895, he invited to Mohonk many statesmen and prominent citizens for a conference in the interest of international arbitration.  So far as is known this was the first American conference on this subject, and during the year many others followed it, held in different parts of the country.  The second Mohonk conference on this subject was held in June, 1896 and the third in June, 1897, and attended by many distinguished men.  Ex-Senator Edmunds, of Vermont, presided at both, and much practical work was done looking toward the establishment of a place for the settlement of international difficulties between this country and England by arbitration.

Alfred H. Smiley was married to Rachel M. Swan in 1854 and their union was blessed with six children.

Albert K. Smiley was married in 1857 to Eliza B. Cornell, of New York.

The citizens of Redlands each fall anxiously welcome the arrival of these two interesting families, whose presence during the winter months adds greatly, not only to the social, but the substantial features as well, of the city’s life.