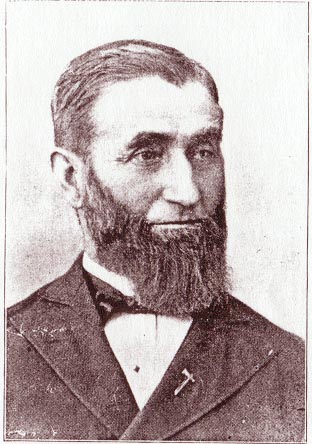 Dr. William M. Smith was born in Paterson, N.J., July 18, 1826, of English and Dutch descent.  After obtaining an academic education at Middlebury Academy and Genesee Wesleyan Seminary he taught school for a time, and then studied medicine with Hon. C.C. Chaffee, M.D., later of Springfield, Mass.  He completed his studies at Castleton Medical College, graduating in 1846.  For five years he practiced at Short Tract, Alleghany county, N.Y., and for two years subsequently was in partnership with Dr. William F. Cooper, an eminent physician and surgeon of Cayuga county, N.Y.  He then went to New York city for experience in hospital and dispensary work, returning to his home in Alleghany County and resuming the practice of his profession in 1854.  In 1856 Dr. Smith was elected to the state assembly, re-elected in 1859 and sent in 1860 as a delegate to the Republican National Convention, which nominated Abraham Lincoln for the presidency.  In 1864 Dr. Smith organized a company of volunteers, and in October of that year was commissioned surgeon of the Eighty-fifth New York state volunteers, and was detailed as a member of the board of medical examiners at Washington during the following winter.  He was acting brigade surgeon of Palmer’s brigade, Casey’s division, Army of the Potomac, during McClellan’s campaign in Virginia, and was afterward transferred with his regiment to North Carolina.

Dr. Smith participated in the battles of Yorktown, Williamsburg, Savage Station, Fair Oaks, Seven Pines and the battles before Richmond, and afterward was in the engagements at Suffolk and Franklin, in Virginia, and Kingston, White Hall and Goldsburgh, in North Carolina.  He resigned his commission in the fall of 1863 and resumed his practice at Angelica, Alleghany County, N.Y. In December, 1872, Dr. Smith was appointed surgeon general of the state of New York, with rank of brigadier-general on the staff of Governor Dix. In 1876 he was elected delegate from the Twenty-seventh Congressional District to the Republican National Convention at Cincinnati.

March 24, 1880, Dr. Smith was commissioned health officer of the port of New York, which office he held until superseded February 3, 1892.  On his retiring from this office, after the longest term of service in its history, resolutions were adopted by the representatives of the city of New York – the Chamber of Commerce, the Board of Commissioners of Quarantine, the Maritime Association and the managers of ocean steamship lines – for his intelligence, energy, courtesy and efficiency in “having so discharged the onerous and responsible duties as not only to arrest at our port epidemic diseases from abroad, but for having so exercised functions practically autocratic as to bear with the least hardship upon commercial interests.”

The resolutions referred to commend Dr. Smith for having adopted a system of vaccination for emigrants coming to America before arrival at our ports, thus preventing, in nearly every case, the development of disease in this country, and for his efforts to free commerce and navigation from burdensome and expensive quarantine measures by the intelligent enforcement of rules calling for watchfulness and care, and for the observation of certain requirements at the port of departure and during the voyage on the part of officers and crews of vessels.

The resolutions state that: “The success of this system is convincingly attested by the fact that whereas under former quarantine administrations vessels from yellow fever ports discharged in quarantine, three miles from the city piers, at an expense of more than double that incurred when the vessels were discharged at their docks, still no yellow fever cases appeared in New York city or in the region contiguous to the city during this period. Dr. smith’s theory that the disease of yellow fever originated from infection established on shore and not from contact with the person of the sick, and that therefore the docks and wharfs of infected ports should be avoided while discharging and receiving cargo, has been clearly proven to be entirely correct.”

After retiring from this important office, Dr. Smith traveled for a year or more in search of health.  He came first to Redlands in 1894 and to reside here permanently in February, 1896.  he has improved and rendered very attractive his residence, Palmateo, on Palm Avenue and San Mateo street.  He has also another ranch and residence, Olivita, on Olive avenue, a ten-acre ranch at the head of Citrus avenue, and other property interests in this city.