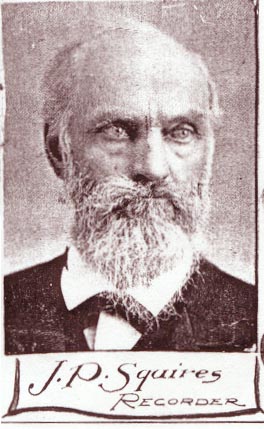 The first city recorder’s court was opened Feb. 15, 1889, by James Phineas Squires, judge, who was then also justice of the peace of Redlands township.  He continued in these offices until his death, which took place Feb. 14, 1890, and just as he had been appointed postmaster of the city.  Dr. Squires was born in Dansville, N. Y., Aug. 22, 1825, where he passed his youth on a farm, and where he received a common school education.  Entering the University of Buffalo, N. Y., he took a medical and surgical course, graduating at the age of 25 years.  Shortly afterward he went to Makesau, Wis, and began a practice which continued for 20 years.

In 1864 he joined the army as assistant surgeon, and was stationed most of the time, until the close of the war, at Fort Scott, Missouri.  Dr. Squires then resumed practice, settling at Austin, Minn., where he became a Knight Templar and a member of St. Bernard Commandery, and also a member of the G. A. R.  In the fall of 1887, he came with his family to Redlands, still continuing his chosen profession.  Dr. Squires was twice married, first to Miss Mary Albright, of Dansville, N. Y., who died in 1865.  In 1869 he married Miss Emily Welter, of Rochester, Minn., who resides with her two children, on Center street.  Mr. Squires first child, a son, lives in Los Angeles.