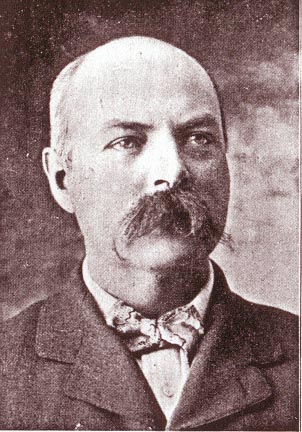 Richard H. Stetson was born at Marshfield, a suburb of Boston, Mass., in 1856.  His father, James H. Stetson, was a direct descendant of Cornet Stetson, who settled in 1634 on the place where Richard H. Stetson was born.  His mother was Miss Phebe C. Nickerson, great-grand daughter of Sir Thomas Nickerson, and was born and reared at Chatham, on Cape Cod.  Richard enjoyed the educational advantages of the schools of Boston.  On reaching manhood he came directly to California, locating in San Bernardino in March, 1877.  He was employed as clerk in the office of a lumber company for about three years, and later was engaged in the hotel and livery business in partnership with his brother-in-law, John A. Cole, under the firm name of Cole & Stetson.  At one time they owned and conducted three hotels and two livery stables, at Colton, Daggett, Needles and San Bernardino.  In 1886 Mr. Stetson was elected County Tax Collector and sold out his business interests.  He received the largest number of votes of all candidates on the Republican ticket, there being a majority of 431.  In 1888 he was renominated and re-elected, this time by a majority of 700, the highest of all candidates on the ticket.

In 1883 Mr. Stetson was married to Miss Jennie Cole, a native of California and a daughter of James A. Cole, of Old San Bernardino.  For nearly fifteen years last past Mr. Stetson has been a resident of Colton and, except in the periods when he was occupied by the duties of the Tax Collector’s office, has been engaged in the livery business and also in looking after ranches that he has owned.   Within the past few weeks Mr. Stetson has become a resident of Redlands, where a substantial brick building has been erected for him after his own plans, to be used as a livery stable.  This has an excellent location on Orange street, between the Southern  Pacific and Santa Fe depots.  It is light and airy and splendidly planned for the purpose for which it is intended.  An especially noticeable feature is a number of box stalls, which will certainly be far more comfortable for their equine occupants than the ordinary narrow stalls commonly used.  Persons who desire to have horses boarded will appreciate this feature.

Mr. Stetson has a complete and absolutely new equipment of everything from a saddle-horse to a tally-ho, and can furnish rigs of all the usual sorts with careful and experienced drivers, if desired.  He has been longer in the livery business than any other man in San Bernardino County now engaged in that business. With his wide acquaintance and his equally well-known reputation for square methods and prompt and courteous business dealings, Mr. Stetson will doubtless repeat in Redlands the success in business that he has made in other portions of San Bernardino County.

There has always been a great deal of livery business in Redlands, which is constantly increasing.  The number of tourists visiting this city grows larger every year and the commercial and agricultural interests in the surrounding territory are constantly growing.  An increase in livery business is a sign of prosperity, for it means that people from other sections are looking after property interests in this section.  The fact that so well informed a resident of San Bernardino County and so shrewd a business man as Mr. Stetson has chosen to come to Redlands to engage in this occupation is an indication worth noting of the position of this city as a business center.