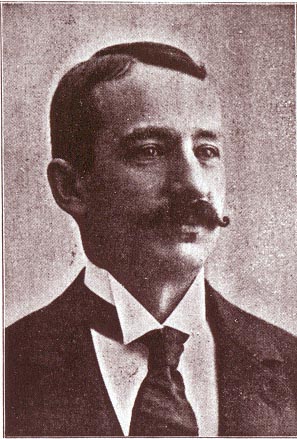 J. J. Suess, a young man, but one of the well-known business men in Redlands, was born August 22, 1862, near Zurich, Switzerland, but was brought to America when 5 years of age, and his family settled at Fort Madison, Iowa, where the father had a manufacturing business.  Mr. Suess received a common-school education both in English and German, and besides these languages speaks Spanish.  From Fort Madison the family of which he was a member moved to Guide Rock, Neb., where they followed farming.  A few years afterward both the father and mother died, leaving a family of nine children, the subject of this sketch being next to the oldest.  The children kept together and managed the farm, which is still in the possession of the family.  When 19 years of age J.J.Suess came to California; went first to Ventura, and there engaged again in farming.  After following this occupation in California for several years Mr. Suess became manager of a general merchandise business at Nordhoff, Ventura county.

December 29, 1889, Mr. Suess was married at San Diego to Miss Mattie E. Dewey, a native of Pennsylvania.  They have two children.  On the 1st. of November, 1891, Mr. Suess brought his family to Redlands and purchased a half interest in the Star Grocery, then owned by J.W. Lewis and situated at the corner of Orange and State streets.  The partnership was continued until January, 1893, when Mr. Suess bought his partner’s interest and has since been the sole owner of the business, which has steadily and constantly increased under his management.  It has been conducted upon very broad and liberal lines for a business of this sort in a city like Redlands.  Always ready and up to the times, Mr. Suess has made a practice of buying all staple articles, such as sugar and flour, in carload lots and at jobbers’prices.. He is rarely caught napping on a rising market, but believes in keeping ahead of the events which are likely to make staple articles of food dearer. He purchases his flour from the millers and his sugars directly from the refineries, and carries constantly a full line of everything looked for in a grocery store, whether plain or fancy.  For the latter no distance is too great, and if California, which is always  first choice with Mr. Suess, does not produce the proper article in the right quality some distant point of the East is drawn upon for a supply.

The fact that Mr. Suess’ business has constantly grown during a period of great depression in all lines speaks all that need be said for his qualities both as a business man and as a citizen.  Always pleasant, always tactful, yet always decided, Mr.Suess is popular with his patrons, and in this fact is one of the principal elements of his success.  Invariable promptness is another.  To make a study and a success of any business in these trying times is an achievement upon which any one may be congratulated.  Mr. Suess is a member of two of the Masonic orders in Redlands, the blue lodge and the Royal Arch chapter, being the senior warden of the former.