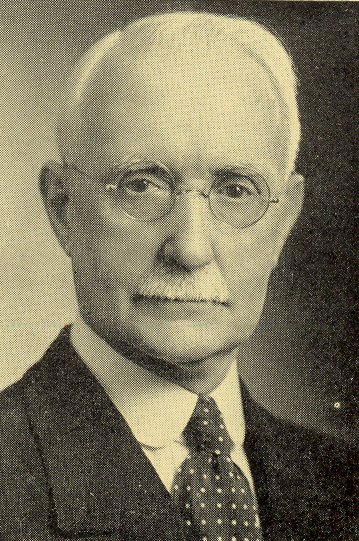 NEARLY 60 years ago an English youth, who had toiled in the gloom of collier­ies since the age of 11, came to work in American coal mines. He educated himself in night schools of Pennsylvania and New York, led an heroic rescue of entombed miners, be­came national secretary for his fellow work­ers, achieved political and financial promi­nence.

Today Redlands holds itself deeply grateful to this same man, Robert Watchorn. His faith in America as a land of opportunity is re­flected in his gift to Redlands of a shrine memorializing Abraham Lincoln, another who arose from humble surroundings. It is the avowed hope of Dr. Watchorn that the shrine may inspire others to emulate Lincoln.

Watchorn was only 22 years old, yet had spent half his life at work, when he glimpsed the Statue of Liberty in New York harbor ­May 25, 1880. Eleven years later he became the first secretary of the United Mine Work­ers of America and was awarded the organiza­tion’s gold medal for leading a rescue party at Dunbar, Pa. In just 14 years more Presi­dent Theodore Roosevelt named Watchorn commissioner of immigration at Ellis Island. Since 1909 he has been engaged in the oil industry, dividing his time between Redlands, New York, England and Oklahoma.

Dr. Watchorn (LL.D., University of Red­lands, 1933) was born at Alfreton, Derby­shire, England, on April 1, 1858. He was the second of nine children born to the late Mr. and Mrs. John Watchorn. His birthplace was the precise spot where in 1929 he dedi­cated a church, Sunday school, manse and ad­jacent property in memory of his mother.

From the age of four years, he attended the church of England day school for seven years. At the tender age of 11 he commenced work at Morewood’s deep colliery and subsequently for 11 years he worked in the Swan wick and Shirland collieries. During this time he at­tended a night school four evenings a week, kept by a kind-hearted and successful lawyer named Ernest Edgar Bone. He left the es­tablished church Sunday school in 1876, be­came associated with the Primitive Methodists at Derby road and has been identified with Methodism ever since. In boyhood days he was an active member of the Band of Hope and in the teen years became an official of the Juvenile Good Templar order. He was also identified with the anti-tobacco move­ment. The pledges taken then have been and still are active principles and practices of his life.

In 1880 he decided to emigrate from Eng­land, realizing there was not much prospect of advancement in an exclusively coal mining center, where employment was hazardous, ir­regular and unremunerative. He sailed from Liverpool on May 14, 1880, on the Cunard line steamer Bothnia and reached New York May 25, 1880. Almost immediately after ar­rival, work was obtained in a coal mine and for eight years this was the employment he followed. It was during this period that cer­tain school authorities of a Pennsylvania local area granted him permission to organize a night school for coal mine workers. The prin­cipal of the school, a Professor Jennings, was so impressed with its possibilities that he personally constituted himself its teacher. Commendable progress was made by the numerous miners who embraced this opportunity.

In 1881 he sent for his parents and the whole family, except one who was a soldier in India, joined him in April of that year. In 1890, Mr. Watchorn was offered the im­portant post of chief inspector of workshops and factories of Pennsylvania by Governor Robert Emory Pattison.

On June 30, 1891, he married Alma Jessica Simpson of Columbus, Ohio, and they visited Alfreton, Mr. Watchorn’s boyhood home, on their honeymoon. They have had two sons, Robert Kinnear and Emory Ewart, both of whom are deceased. The Lincoln Shrine is in memory of the latter, who died in World war service.

Leaving state service in 1891, Watchorn became United States immigration inspector. One year later he became supervising inspec­tor-general of the national immigration ser­vice. In that capacity he visited many for­eign lands, all of the states of the union, the provinces of Canada and portions of Mexico.

In 1898 President McKinley appointed Mr. Watchorn first commissioner of immigration for the Canadian-American border service his jurisdiction extending from Halifax. Nova Scotia, to Vancouver, B. C. Here his dealings with officials of steamship lines, railroad com­panies and the Canadian government officials were intimate, frequent and occasionally vexatious. Out of all of it, however, evolved ex­periences of unquestioned value to himself and of considerable satisfaction to both coun­tries. In 1908 he was received by the king of Italy, Pope Pius IX and many other dignitaries of church and state.

President Roosevelt summoned Mr. Watchorn from his post at Montreal, Canada, to the White House in January, 1901, and offered him promotion by assignment to the commissionship at Ellis Island, New York harbor.

He entered upon his duties there in February, 1901, and remained in charge of the Ellis Island station until the end of President Roosevelt’s term of office in 1909. At this time Mr. Watchorn severed his connection with the public service, in which he had been engaged exclusively for nearly 20 years.

In the summer of 1909 he became interest­ed in the oil industry and has continued to be thus engaged.

Watchorn philanthropies have benefited many institutions and communities. They in­clude a large gift to the Bible Institute of Los Angeles, chimes for the First Methodist Church of Redlands and the Episcopal Church of La Crescenta, an organ to the First Meth­odist church of Los Angeles, the Lincoln Shrine in Redlands, and a soldiers’ monument in the market place of Alfreton.