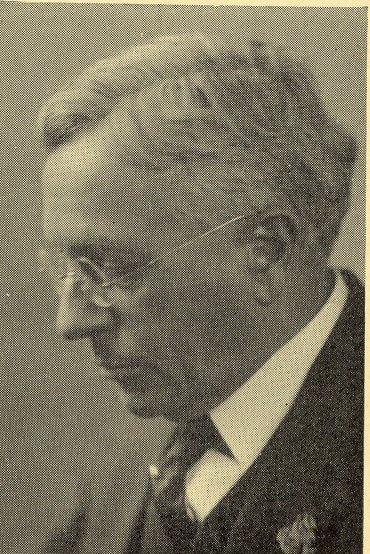 RETIRED banker, citrus grower and de­veloper of numerous properties, Harry H. Ford today can look with satisfaction upon half a century of prominence in Redlands. More than two years before the city’s elec­tion to incorporate, Mr. Ford spent two weeks in Redlands. He returned to Philadelphia, quit his position in the sales department of a coal and iron company, came back to Redlands and has been here constantly since December, 1886. Civic interests have been thankful for the fact.

Only two cities, Philadelphia and Redlands, have had claim upon Mr. Ford’s interest. He was born in the Pennsylvania metropolis July 27, 1865. His journalist father was president of the Pennsylvania Fish commission for 25 years and was head of the American Fisheries society for one year. The boy was educated in public and private schools until the age of 15, when he commenced his six-year career with the Philadelphia & Reading Coal & Iron Co.

It was in May, 1886, that Ford came to Redlands for a two-weeks visit with his brother, Isaac Ford. When he adopted the village as his permanent home, he worked with Isaac as a surveyor. In 1890 he bought a quarter section of land from the Southern Pacific railroad and established his beautiful ranch home, Edgewood, on the Sunset drive heights overlooking Roosevelt canyon. There he built his residence in 1897 and has culti­vated 100 acres of oranges. His full time was devoted to ranching until April, 1894, when he took a bookkeeping position in the Union Bank. Ford was the only member of the bank’s staff besides Curtis Wells, the presi­dent, and Karl C. Wells, the cashier. Three years later the elder Wells died, Karl became president and Ford advanced to the cashier’s office. When Karl Wells shifted to the tele­phone business Ford became president.

The bank changed ownership on several oc­casions meanwhile growing vastly from its modest beginning, but Ford remained at the helm until Sept. 1, 1935, when he retired. Today it is a unit in the Bank of America system and Ford is chairman of the local ad­visory board.

Joining in 1902 with the late G. A. At­wood, Mr. Ford purchased a 20-acre orange grove at the northeast corner of Fern avenue and Cajon street and created a subdivision which became a densely populated residence area. Minor subdivisions also are to his credit.

He owned the corner at Citrus avenue and Orange street, where the Fisher block was erected. He with G. A. Atwood and F. P. Meserve bought and built the northeast cor­ner of Fifth and State streets, present site of the Home Furniture Co., when that site was chosen for the post office building, until rec­ently known as the Chandler block. He built the structure on the southwest corner of Sixth and State streets, which covered more ground than any other Redlands building of that time. Mr. Ford also owned the Oxford hotel (the former Baker House) when the Standard Oil Co. purchased the property for its service station at the northeast corner of Orange street and Central avenue.

Mr. Ford was a director of the Chamber of Commerce for 18 years and was its president in 1917. Today he is president of the Red­lands & Yucaipa Land Co., the South Moun­tain Water Co. and the Redlands Heights Water Co. He is a director of the Crafton Water Co. and a trustee of the Monte Vista Syndicate, which purchased the Burrage and Greene estates near Smiley Heights with the intention of encouraging a tourist hotel devel­opment.

He has been a Mason for 40 years and was treasurer of the Blue lodge during one year. He is an associate member of the Redlands Realty Board.

Mr. Ford was married Nov. 8, 1887, to Sallie Leeds in Philadelphia. Celebration of their golden wedding anniversary was a nota­ble event last year. Their children are Mrs. Emelie Ford Osborne, of Hollywood, and H. H. Ford, Jr., and Olive A. Ford, of Redlands. They have a granddaughter, Sally Osborne Gallagher, of Hollywood.