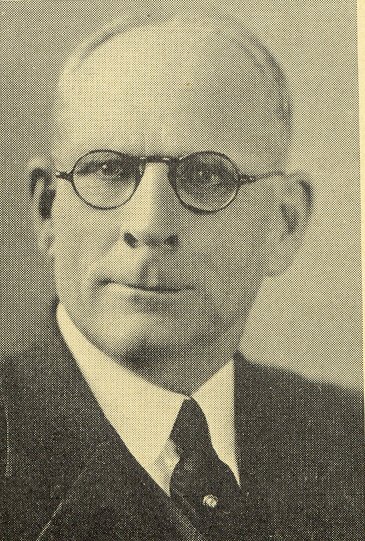 HALF A CENTURY ago, the 19-year-old Arthur Gregory was a Redlands farm hand earning 50 cents per day and board. But he kept pace with the booming town so ably that today his farflung family corpora­tion, the Redlands Security Co., owns a vast domain in the San Bernardino valley and mountains.

Founder of Mutual Orange Distributors, Mr. Gregory once operated up to 40 Califor­nia packing houses in his own name, shipping from 3,000 to 4,000 carloads of fruit each year. His products from the 1,000-acre Mari­gold ranch have been valued at $350,000 per year. Hundreds of acres of oranges have been of his own planting. His La Posada hotel is Redlands’ most luxurious hostelry. His 1,500 ­acre Crest Forest and Lake Gregory projects represent the most ambitious mountain enter­prise of recent years. He has a theater build­ing in Fullerton, a four-story office structure in San Bernardino. And it all started with manual labor in Redlands 51 years ago.

Not much of Arthur Gregory’s story ap­plies elsewhere than Redlands. He was born April 3, 1869, at Belleville, Canada, in the province of Ontario. There his father, Wil­liam Gregory, was engaged in general farm­ing until Arthur was three years old and the family moved to Litchfield, Ill. Arthur went to a country school, came to Redlands in 1885 and spent two more years in the little old Lugonia school.

William Arthur Gregory (1831-1910), his father, preceded him to Red­lands by three years, Arthur Gregory in 1885 found the family tract consisting of a 15-acre strip, one end of which fronted on The Ter­race, the other on Water street (Central ave­nue), where the Gold Banner association’s packing house stands today. On this property Arthur wore callouses on his hands and saved his 50 cents per day until he was able to en­ter the business of drying fruit.

“Fruit growers were making so much money in real estate that they no longer con­sidered it necessary to work,” Mr. Gregory remembers. “They could go down town in the morning, buy a lot or two and sell them in the afternoon for a $50 or $100 profit. The boom was on. Everybody was speculating.”

So it was that the ambitious young Greg­ory found it easy to lease peach and apricot orchards, which the growers were neglecting. He harvested the fruit and dried it, establish­ing a business that lasted for 10 years. With a wagon and pair of horses he can­vassed the countryside for honey, which he bought for Porter Brothers, of San Francisco. He shipped them 40 or 50 carloads of honey and dried fruit each season.

Simultaneously he started his orange pack­ing plant where the Redlands Mutual Orange Association operates today. This mushroomed into a chain of packing houses extending from Corona to Exeter, forming the nucleus of Mutual Orange Distributors, which Mr. Gregory created by converting the houses into co-operatives. For about 15 years he re­mained as general manager.

Meanwhile his energies grasped other op­portunities. With J. D. Langford he planted hundreds of acres of oranges in the Williams tract. They also bought the Delta Farms tract near Colton and planted peaches extensively.

Twenty years ago Mr. Gregory bought 1,­000 acres of unimproved land northwest of Redlands and established his Marigold farm, where he produced from 3,000 to 4,000 head of fattened cattle annually and conducted what was recognized generally as the most in­tensively cultivated, most productive ranch in the entire valley. This he sold in 1930 to C. S. Chapman. In that deal he acquired his Ful­lerton theater building.

In 1930 he built the 50-room La Posada hotel, thus improving the northwest corner of State and Orange streets in response to a gen­eral cry for a modern hotel, which he opened Sept. 12, 1931. At the same time he pur­chased the four-story West Coast theater building at Fifth and E streets, San Bernar­dino, adding to commercial holdings that al­ready included the Security building on East State street, which he had acquired in 1925. 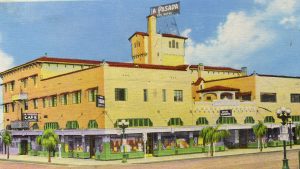 More than 40 years ago, when his citrus packing operations demanded a large quantity of boxes, Mr. Gregory acquired 1,500 acres in the San Bernardino mountains so that he might have the timber. In this area, northeast of Crestline, Lake Gregory was completed last Feb. 8 and a promising new resort area was born. The lake, one mile long and one-­half mile across at its widest point, is sur­rounded by property control1ed by the Crest Forest county water district, of which Greg­ory is president. The Gregory holdings are in the name of the Redlands Security Co., which Mr. Greg­ory created in 1909 as a family corporation.

Mr. Gregory has been married 25 years to the former Frances W. Winkler, of Redlands. Their children are Arthur, Jr., 19 years old, and William Thomas, 15.

He has been a trustee of the University of Redlands ever since he helped it to become established. He also has been a trustee of the First Baptist church for some 40 years. He was chairman of the finance committee when $196,000 was raised for construction of the new Y. M. C. A. He has long been a direc­tor of the Chamber of Commerce and mem­ber of the advisory board of the Security-­First National bank.

For many years Mr. Gregory lived at the Vogta Mashek home at 706 Orange Street. 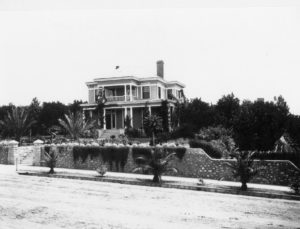 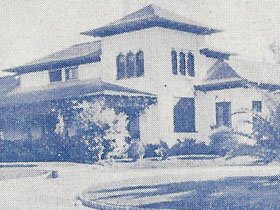