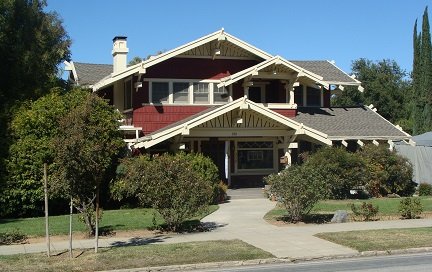 The exuberant details of the house on the corner of Alvarado and Cypress immediately draw the attention of passersby. Although now numbered 330, it is in the 200 block and was formerly numbered 230. There is no doubt that this 1912 home was built in the height of the Craftsman style. Extensive use of thick beams and multi-gabling, distinctive vent patterns and textured wood shingling all declare the influence of Pasadena’s Green and Green look. Some Arts and Crafts homes display detailing seen in Japanese structures, while others may resemble Swiss chalets, but sometimes, like here, there is a happy marriage of both. The wealth of rafter projections and window casement extensions have caused the Davies to believe that they used as much trim paint to cover all this wood as was needed for the rest of the house.

Even though this house has graced the corner of Alvarado and Cypress for a century, it has not seemingly experienced much change from the plans of architect Robert Ogden. It was built for $4,000 for real estate agent C. H. Wilkins. While he was in residence, the view from the front was of orange groves across the street. Ogden owned it until 1920, when he sold it to a widow, Joanna Haynes, who had been living on West Highland Avenue. A Daily Facts article about that move also gave a clue about the next owners, perhaps the most notable Redlanders to have enjoyed the features of this home. In the 1930s, Grace Mullen and husband George lived here. She, of course, is best known as the founder of the Redlands Bowl and the Community Music Association. She led the organization for over fifty years. There must have been much planning and creativity directed from this address. The previously mentioned newspaper article written 10 years before the Mullens moved in noted that Mrs. Haynes’ sister was married to George Mullens’ brother, so no doubt this family already knew that they would enjoy living here.

Each façade shows different arrangements of windows and room projections. The only symmetrical aspect is the front porch with two windows with their shaped muntins which flank the wide front door. This 9-paned door has a matching sectioned screen door that seems to have always been there, letting the breeze through, and allowing a bit more of the front garden to influence the home interior. Another transition device is the set of pillar piers in the living room, which remind you of the pillars outside. Some of these form the porte-cochere, which is pergola-topped, rather than enclosed. Behind the house is a detached garage, since cars were becoming more popular. Other original features include green slag glass decorating two transom windows, and bungalow-style light fixtures. Ronald and Sandy Davies have made this their home since the 1980s. They are particularly happy that the original fireplace is intact with an Ernest Batchelder tile surround. This company was a favorite for those wishing to enjoy the new hand-made art tiles. The subtle shifts of warm colors and specialty pieces of birds and vines complement the other interior details of natural elements. They were surprised when comparing an old photo of their home with today, as the sunroom to the left of the house wasn’t always there, but it has been seamlessly integrated. For maintaining and loving this beautiful house, the Redlands Area Historical Society is proud to present a Heritage Award of 2013 to Ronald and Sandy Davies.