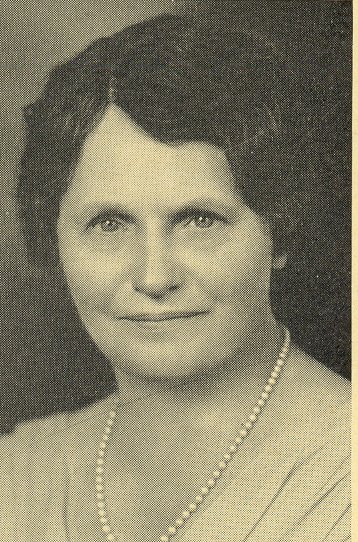 GRACE STEWART MULLEN, philanthropist, humanitarian and indomitable worker for peace and understanding among people through the dissemination of music, might well be titled “first lady” of Redlands. Wherever Southern California musicians gather, she is known as “Mrs. Mullen of Redlands bowl.” Her untiring labors as founder and managing head of the Redlands Community Music association have brought her not only the personal friendship of distinguished artists the world over, but have brought international publicity of the finest kind to the city in which she lives.

She was born on a farm near Sparta, in White County, Tennessee, one of a family of 11 children. Her people were educators. Her grandfather was a trustee of Doyle and Burritt colleges. Another grandfather, Dr. Henry P. Smith, was founder of the first public library in White County. Both of her parents were school teachers and public spirited citizens of their community, She grew up in an atmosphere of books and learning, in a home where there were always guests.

Having furthered her education at Peabody college, in Nashville, she decided to adopt school teaching as her career. In 1902, she came to Los Angeles, where she had many relatives, and secured a job in a little county school near Fillmore, where she taught for one year. Later, she taught for two years in the public schools of Whittier.

In 1904, she went East to visit her home and attend the St. Louis fair. On this trip she met George Emmett Mullen, member of a family which had been friends of her own family since before she was born. The next summer, 1905, she went East again and they were married.

Mr. Mullen was assistant manager of the Owensboro Brick & Sewer Pipe company, one of the best known concerns of its kind in the entire South. He retired from active business in 1907 and they came to Southern California to make their home, settling in Los Angeles.

“We came to Redlands,” Mrs. Mullen relates with a smile. “I was enchanted with it. Nothing would do but I must move here immediately. We had a location all picked out, but just as we were about to buy it, some Redlands people told us that everybody here had tuberculosis.”

Thus it happened that it was not until 1916 that the Mullen family – which now included Frances and George – moved to Redlands to live. They built a house in Garden court, later moving to 330 West Cypress avenue, Mrs. Mullen became active in club, P.T. A. and charitable work. During the World war, she did outstanding work and was awarded a certificate by President Woodrow Wilson.

But still she was not happy. She felt there was something more she must do – something to promote peace, to help drive hate out of the world, to break down class distinction and make people love and understand each other better. A music lover herself, she naturally thought of music as the universal leveler. Music was for the rich? She would give it to the poor. In 1924 she launched her project – the Redlands Community Music association – and the rest is history.

Behind her are struggles, misunderstandings and heartbreaks, days when she walked the streets of Redlands, begging for contributions; nights when she recited Kipling’s “If” to give herself courage to go on. Today thousands attend the summer concerts. Redlands bowl is written up in national and international magazines, A world famous composer said upon landing in New York, “I know of three places in California – San Francisco, Los Angeles and Redlands.”

Today, with the illy scrawled thanks of some humble listener in her hands, Grace Stewart Mullen is happy.