Dr. William M. Smith originally resided in his 1892 home called “Palmateo” at the northeast corner of Palm and San Mateo. His health and age convinced him that a home near the main downtown area would be more convenient. He contracted with the firm of Lynn and Lewwwwis for erecting a $5,000 residence on Olive Avenue near Smiley Park. Two months later on July 6, 1900, the Smiths were preparing to move to the new home.

Contrary to other reports, Dr. Smith did live long enough to enjoy his new residence and entertain the Fortnightly Club with his “Civil War Reminiscences.” The Redlands Facts also reported that Dr. Smith dubbed his home the “Colonial Inn” because of the pine columns on the Olive Avenue entrance. 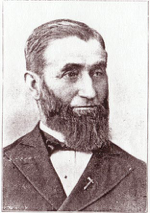 The home originally had eleven large rooms and a $1,000 carriage barn. Lynn and Lewis demonstrated the latest of architectural styles with Greek pediments and columns, a balustrade on the roof and the heavy use of brackets and finials to accent the eclectic style.

Jasper Newton Fields, University of Redlands’ first president, rented the house prior to Mrs. Grace Chadwick’s purchase of it in 1926, and it remained her domain for many years until the Davis Applewhites bought the home. The Applewhites converted the eleven large rooms into twenty-four rooms and four apartments. David Applewhite related the story of the possible trip of the pine columns around the Horn and of the problem of getting bees out of the hollow columns when painting was necessary.

The Applewhites sold the home to Mr. Blaine H. Know in 1966. Mr. Knox manages the apartments and resides at the home. He converted the carriage barn into two more apartments since his ownership began in 1966.

This home maintains its integrity despite its multiple use, and is a credit to the community as a home and architectural masterpiece.