Edward G. Judson was one of the co-founders of Redlands in 1881. He named Redlands for its red soil. In addition he served on the Board of Trustees for the new city of Redlands in 1888. Judson practiced real estate, but was really a city builder. Unlike many Southern California boom-period promoters, Judson lived in the town he founded and did much to enrich the community. Among other things, he donated 15,000 ornamental trees to the citizens of Redlands during 1891 and 1892. These trees were used to beautify the streets of the city and are still a monument to the man that gave them. Judson had come to Lugonia in 1877, but in 1888 he built his family home at 653 West Highland Avenue in Redlands. 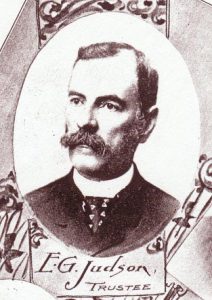 The Judson house at the southeast corner of Highland Avenue and Center Street is a two and one-half story wood house with overlapping siding on a brick foundation. Originally the house had a porch on three sides but later modifications decreased its area. The wooden porch has a decorative wooden pediment over the main door, square posts and wooden supports with pierced decoration. This fine example of early Redlands architecture includes a gable with overhang, dormers, and boxed cornice eaves with brackets. Judson came from Bridgeport, Connecticut, and built his home to plans similar to those of the New England Victorian style.
In 1911 the house was purchased by attorney Henry M. Willis. Adding a library and bedroom, he remodeled the house extensively. After the Willis’s sold the house in 1917, it passed through many hands and during the 1930s it remained vacant and was vandalized. In 1939 the home was purchased by the D.J. Stewarts who restored the home and maintain it today.