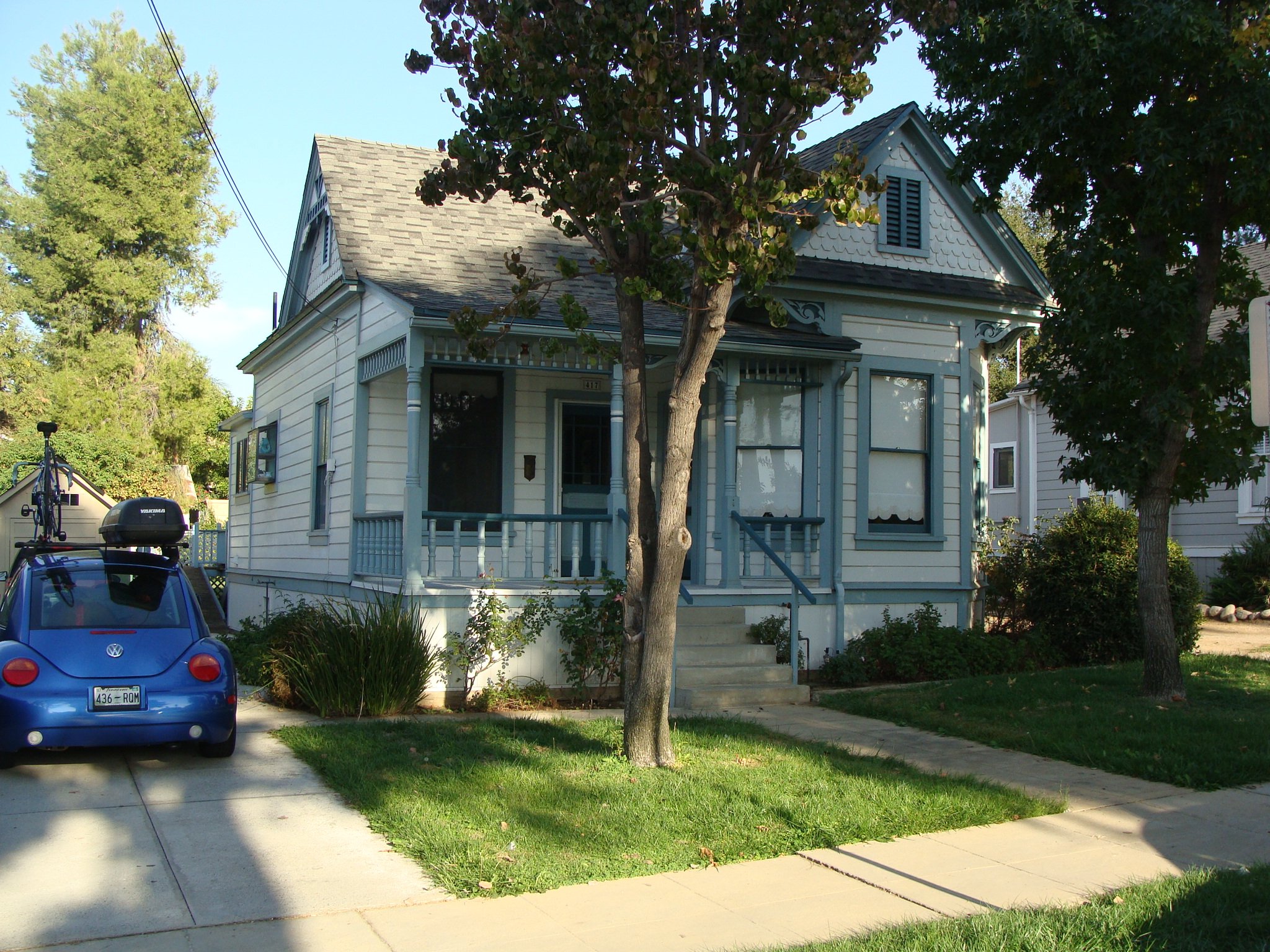 The Floyd Residence at 417 La Verne street was one of several house built by H.H. Daniels, an early Redlands developer. He purchased Lot 5 of Block F of the Second Preliminary Map of Redlands in 1892 and subdivided the property.

A city ordinance passed before Daniels had finished building the Victorian cottages required that all homes be different in exterior design Daniels reversed some of the plans to satisfy the ordinance. This home was built in 1892 at a cost of $1200 and was purchased by C.M. Baxter, another early developer to be used as a rental.

This L-shaped Victorian cottage is cross-gabled, with the north facing gable having decorative bargeboard below the eaves, and fish scale shingles while the west facing gable is decorated with molded bargeboards, flat frieze, fish scale shingles and a pent roof closing the gable. Below the pent roof at the corners are scroll carved triangular brackets beneath boxed cornice with moldings.

The front porch is covered with a shed roof that is an extension of the main roof and tucks under the front gable. Three turned posts support the roof with decorative spandrel below. Turned balusters support the handrail. Two original doors provide entry to the front rooms of the house. The siding is redwood shiplap and new skirting has been added to cover the rock foundation.

Floyd and Ida Hardy lived in the house as early as 1902 as indicated in the Redlands City Directories, purchasing the house in 1908. Floyd was one of the two Redlands Street Railway conductors before the line was electrified from 1899 until 1904. He became Division Superintendent of the San Bernardino Valley Traction Company in 1905. In 1907, he was groundsman for Edison Electric Company and by 1910 he worked as a painter for H.E Daniels.

The third owner, Mrs. W.W. Smith bought the house in 1911, screening in the front porch at a cost of $125. In 1919, a J.L. Criswell purchased the house as rental property, until 1923, when he sold it to Hiram and Isabe Geddes. Hiram was employed by Redlands Plumbing Company and they lived in the house until selling it to Mary N. and Charles Pool in 1977.

In 1990, Bradley J. and Revelle Floyd purchased the house with the intention of renting it. Living next door, it was convenient for them to repair and remodel the well worn cottage. Under their loving hands, the house was transformed from an old house in disrepair to a beautifully restored Heritage Home. Every inch of the house has been scraped, painted, sanded, refinished. Meticulous care was taken in restoration. After putting so much work into the house, they had no choice except to live in it themselves.

The Redlands Area Historical Society wishes to thank the Floyds for their hard work and dedication in bringing this historic resource back to life.