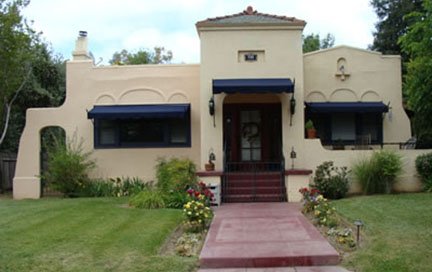 Builders in Redlands were busy in the 1920s constructing a plethora of architectural styles, including Tudor, Normandy, Egyptian, Spanish, and other colonial revivals.  The California bungalow was also included in the mix.  One of the busiest builders was Hollander Garrett Huizing.  The same year he laid out his Buena Vista tract, Huizing was building the Spanish revival style house at 755 Cajon Street.

Franklin McCellan and Grace Worden Wishard raised their three children in Kansas and Iowa before moving to Redlands. The couple had graduated from the Chautauqua Literary & Scientific Circle in 1888, a four year course in required reading that included a Short History of the Early Church, Recreations in Astronomy, and The Physiology and Hygiene of the House in Which We Live.  They were in their early 70s, although not alone, when they moved into their new home.  According to the 1930 Census, their daughter Grace Stonebrook and four grandchildren lived with them.  One of the grandchildren visited the house a few years ago. She shared with Jolene Caughey that originally there was no basement in the house.  At the insistence his wife, her grandfather built a basement after the fact.  Frank was an orange grower.  Grace Wishard died in 1944 and Frank in 1950.  They are buried side by side in Hillside Cemetery.

Beginning in 1950, the city directories list Grace Stonebrook living in the Tudor revival style house next door at 751 Cajon.  Grace taught in the Bloomington schools for many years and passed away in 1977.  Meanwhile, a series of residents lived at 755 Palm from 1950 to the early 1960s, including Robert and Elizabeth Kelley, Dr. Phillip Loge and his wife, Helen, Grand Central Rocket engineer Perry Ritter and his wife, Alice, and L. B. and Amanda Wolfenson.

The 1915 Panama-California Exposition and Spanish Colonial revival designs of architects Bertram Goodhue, Myron Hunt, Irving Gill, and others were to dominate California’s cities and towns.  Asymmetrical with stucco walls, the Frank Wishard home is a classic one-story Spanish revival home. The Roman arched entry porch with a pyramidal room and red tile trim is balanced on both sides with two sets of double hung windows with a larger center window to the left and right of the entrance.  On the front façade above the windows, cast arches present the illusion of Palladian windows.  The front door is highlighted with sidelights.  The adobe-colored walls are accented with cabernet-colored window trim and matching awnings with wrought iron supports. A simple parapet is featured to the right of the porch.  There are several niches along the façades and there is a wall attached to the house on the far left with a simple arch. A tall hedge on the south side provides screening and the shiplap sided wood garage facing Palm is complete with vintage folding doors.

The home went through a series of owners and renters from the mid-1960s until William and Jolene Caughey leased the house in 1993.  They purchased it five years later.  Jolene and her late husband, William, created a beautiful oasis at the corner of Cajon and Palm, a home complete with an outdoor living area, fireplace, and pergola.  The Redlands Area Historical Society is pleased to honor Jolene Caughey for her stewardship, pride of ownership, and meticulous care of this classic Spanish revival home.