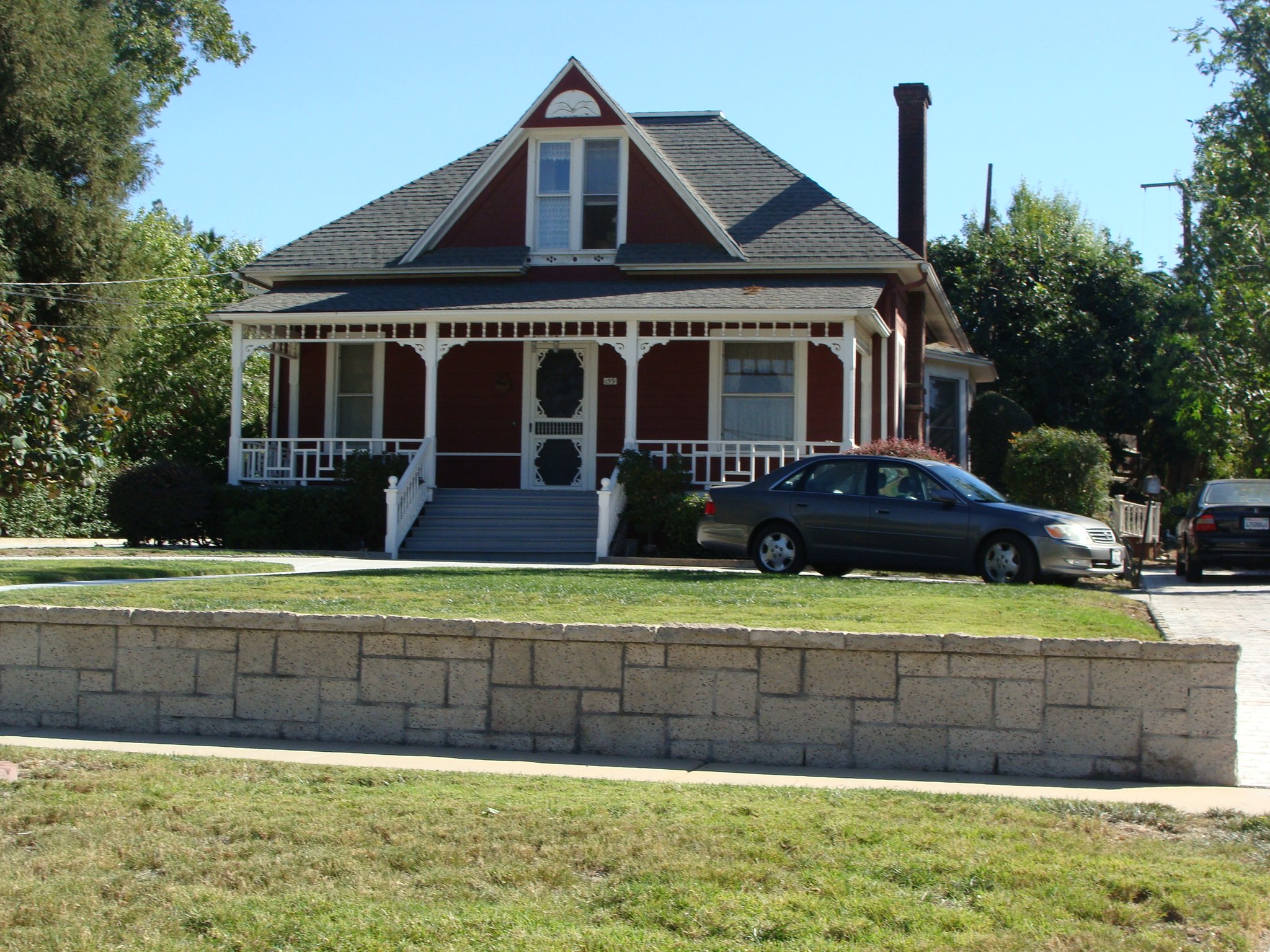 Clenton G. Gaylord was given the deed to this property in 1890 by Mary A. Gaylord Twitchell. The March 7, 1891 issue of the Redlands Citrograph building list notes that a residence will be built by Gaylord for $1700. Gaylord, who was listed as a carpenter by trade in 1893 San Bernardino County Directorv probably built the structure himself. Additional buildings and orange groves were added within the next few years. The Gaylord family would remain there for a little over ten years.
This one and one-half story ‘hipped roof Victorian cottage was constructed with shiplap horizontal wooden boards. It has a distinctive front facing pedimented dormer gable with windows and an interesting eyebrow shaped gable vent The one-story porch extends across the front of the cottage supported by milled posts and decorative comer work. The porch has stick railing and turned spindle work frieze. The steps leading from the porch also have a wooden railing.

Orange grower Hugh Montgomery and his wife Pearl owned the property from 1907 to the early 1960s. The original orange groves were retained and new ones added in 1914. The groves would remain intact until the Banyon Street property to the south was developed. Richard and Beverly Weisberg owned the home for 30 years from 1965 to 1995. They made many improvements to the property, including interior and exterior restoration of the structure. The Weisbergs placed the property on the City of Redlands Historic Register in 1994.
The present owners Ron and Kay Kallendar acquired the property in 1995. Kay recalls her experience of buying the house. Beverly Weisberg invited the Kallanders to tea along with Barbara Montgomery, who had been born in the house. They told stories of the house for three hours, ending the afternoon with the fact that this was a happy house and nothing bad had ever happened here. The newest part of the house is a room designed by Tom Kelgord in the rear due to a fire in 1996. In the back, a deck enhances the area outside the family room. Spindle and post design was included to match the mill work of the front facade. Careful attention to preservation guidelines were used in order to maintain its compatibility with the original historic structure.

The Redlands Area Historical Society commend the Kallanders for their continuing stewardship of this historic property.

Researched and written by Christie Hammond.