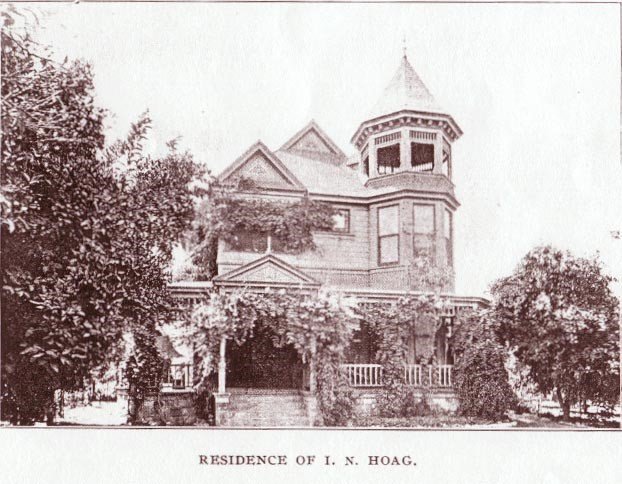 Isaac Newton Hoag, a native of New York, made his way to Northern California in search of gold in 1849. After a brief stint in the gold fields on the American River, he moved to Sacramento and became a merchant. In 1853, Mr. Hoag was admitted to the California Bar, beginning in 1861 a colorful career as an elected member of the California legislature, as a county judge, as secretary of the State Agricultural Society from 1862 to 1872, and as Commissioner of Immigration for the Southern and Central Pacific Railroads. It was as a commissioner of immigration, assisting the Chicago Colony, bound there to make their home, that he became acquainted with Redlands, He purchased 1600 acres, belonging to the Crafts estate and, in 1887, he and his wife, Georgiana decided to make Redlands their home. 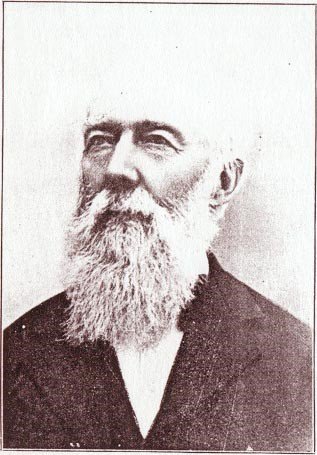 A site of twenty-five acres of bearing groves was chosen for their home in Lugonia Heights. According to the Citrograph by October 1887, Hoag had made several improvements to his property, including streets and gravels sidewalks. The impressive residence, begun in the fall of 1888:

…will have ten rooms, wide halls, and verandas, large bath room and pantry, china and other closets. In profusion cathedral glass and oil finished redwood will be used in finishing and the entire house has been arranged with both eyes wide open for both comfort and convenience amid beauty and picturesqueness.

The architect, Mr. Zwicker, the contractor, M.A. Clark, and the stone mason, Mr. Hammond completed the 2 and 1/2 story Queen Anne style home and barn for $6,000 in 1889. The structure has a multi-cross-gabled hipped roof with half-timbered gables, decorated with embedded glass and seashell ornamentation. It has horizontal wooden siding with fishscale shingles on the second story recessed porch. It contains all the classic elements of this style, including the 3 story turret with dentils, which was used as an aviary, and the tall brick chimneys. The encircling verandah with a tin ceiling has turned posts and balusters, bay windows, and other varied window shapes with stained glass. The original carriage house, located directly behind the house, still stands, now used as a residence on another parcel of land.

Mr. Hoag continued to live in Redlands until his death in 1898. He contributed much to the city. In 1889, he was the first president of the Redlands Horticultural and Improvement Society in 1889 and was postmaster at the time of his death. Georgiana continued to live in their home until her death in 1928 when the Hoags’ daughter, Lizzie M. H. Warner, widow of Clarence Warner, who had owned the Warners brothers Excursion firm, took possession until her death in 1942. She is buried near her parents in Hillside Cemetery.

Over the next thirty-five years there were several occupants of the home, including Mrs. Essie Jacobs, a practical nurse who resided there from 1947-1952, a minister, Dwight H. and a substitute teacher, Inga K. Ball from 1952 to 1965, F. H. Parrot, Jr. and the Gary Masons from 1973 to 1977. Samuel and Virginia Baxter, who lived there from 1978-1984 realized the historical and architectural significance of the home and began the restoration, including the interior. They also added the garage. In 1978 the Baxters placed the home on the Redlands Register of Historic and Scenic Properties to preserve it for future generation. In July 1984, lone Hansen purchased the property and has continued the restoration.