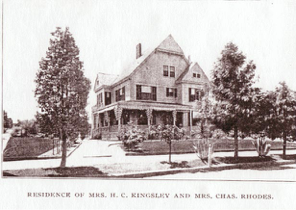 The Citrograph described the Kingsley-Rhodes home in the October 12, 1891 issue as follows:

HH. Pettit, who arrived a couple of weeks since from Gloverville, N. Y., has completed arrangements for having a fine residence built on his choice property on Walnut Avenue. We were shown the plans at Mr. J. Lee Burton’s office. The house will be of the old colonial style of architecture, and will contain eleven rooms, baths, and closets, and will be supplied with gas, speaking tubes, and all modern conveniences. The house will be two stories in height with basement and attic. There will be circular porches, artistic bay windows, a handsome tower, etc., and as seen by the plans, presents a very attractive appearance. The cost of the building will be $8,000. He will also have a very neat barn erected. The house will be ready for occupancy next fall when Mr. Pettit returns from New York.

After the estate was settled, Mr. and Mrs. Lyman King, Jr., lived in the home until 1958. (The James Hammond family reside in what was once the carriage house of the Kingsley-Rhodes home at 1010 Pacific Street.) The 1891 carriage barn cost $2,000 to build. This amount alone could have built a sizable cottage.

The two and a half story structure originally had eleven rooms. One bathtub and two closets replaced the earlier cottage on the site owned by Mrs. Myra Howard Field, the wife of Kirke Field, a prominent banker. The current owner is Miss Yvonne Crites.