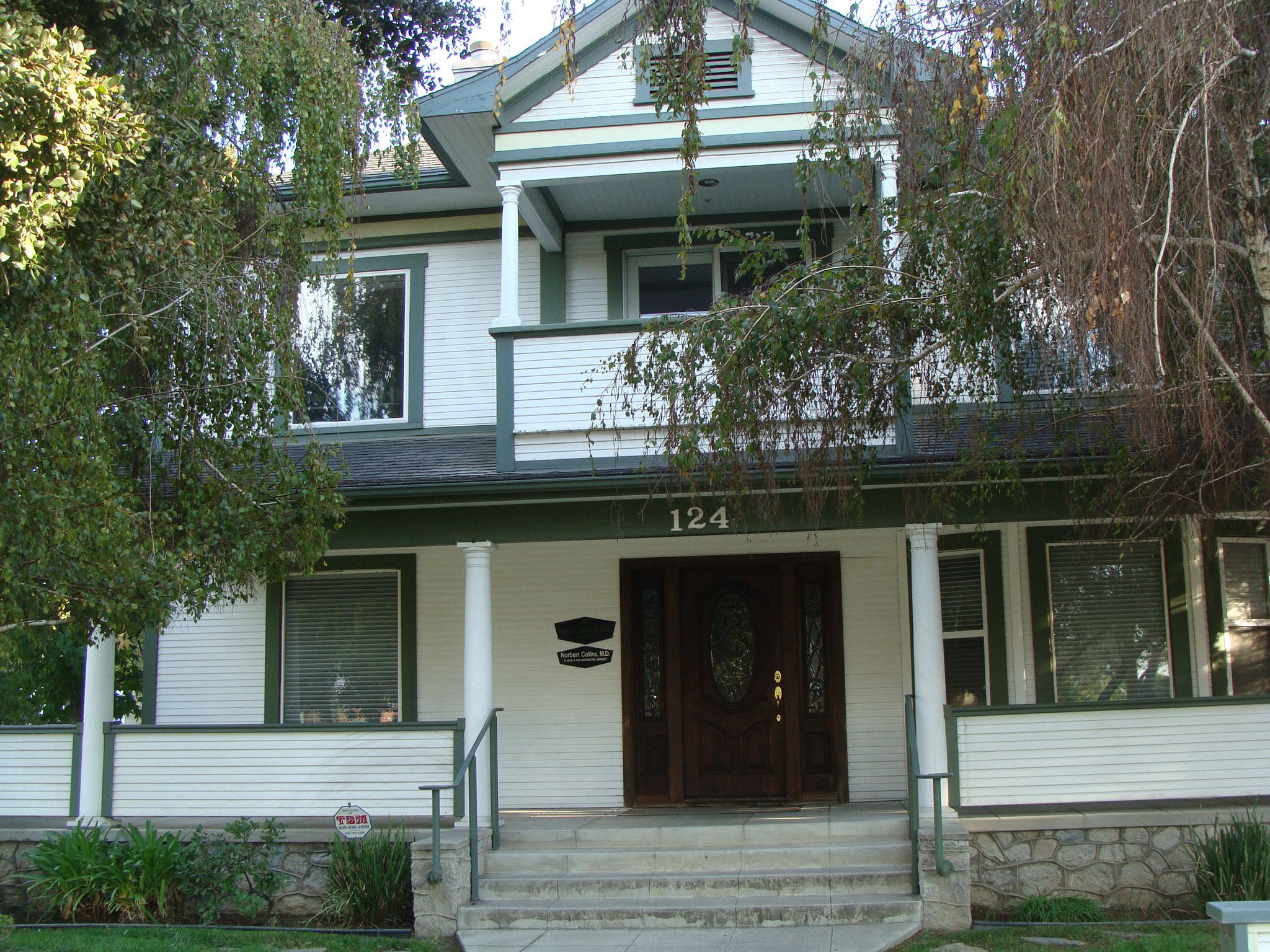 Reverend Charles Libby was a First Methodist Episcopal minister and moved to Redlands in 1901. He was a native of Maine, his first wife, Bella died January 15th, 1903, his second wife, Charlotte, was a native of New Jersey. Together they constructed their new two-story home just one block east of the Methodist Episcopal Church. The original building permit was dated December 13, 1905 at a cost of $2500 and C.C. Denel was listed as the builder.

The Libby home has a truncated, medium hipped roof. Facing north is a high belcast gable of clapboard siding which matches the main house. The gable contains one wooden vent of horizontal slats. Directly under the centered gable is a walk on porch, which is supported by two turned posts The balustrade is solid clapboard which matches the balustrade of the open front porch.

The Redlands Daily Facts of December 8, 1910, mentioned that the Libby had just returned after several weeks stay at Loma Linda. Mr. Libby was much improved as a result of the treatment at the sanitarium. On January 7, 1911 he did pass away and had a large funeral service at the Methodist Episcopal Church. Water hook-up records in describing the house also listed an exterior tent. Many people with breathing problems, such as tuberculosis, would choose to sleep outside for their health. This might have been the case with Reverend Libby.

Charlotte continued living in her home and rented out rooms until her death on December 26, 1921. She was a sixteen year resident of Redlands and during that time was active in the Methodist church. County assessment records show the property first going to her daughter, Charlotte Magee in 1925. From then on the house was used as rented rooms with different owners.

In November 1992, Redlands building permits list the owner of 124 East Olive as Steven and Ingrid Trenkle. Dr. Trenkle and her husband began an extensive renovation project to convert the home into an office building. A large addition was added to the south side, the porch foundation was replaced with cutstone, windows replaced, and the front door replaced by an attractive new door with side lights. The Trenkles carefully transplanted the two old palm trees on the property, and also planted oak trees in the parkway to match the beautiful existing oaks of Olive Avenue.

The Redlands Area Historical Society wishes to show appreciation to the Trenkles for their renovation by presenting them with this Commendation Award for Adaptive Reuse.