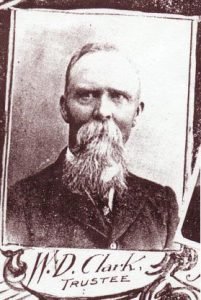 In the 1897 edition of Illustrated Red1ands, the home of W. D. Clark on The Terrace is pictured. Mr. Clark came to Redlands on a land prospecting trip in the early l890s and later returned to make his home here. He eventually became an orange grove owner and served as president of the Lugonia Water Company. In 1895 Mrs. Clark bought about an acre of land for $600 from the First Congregational Church of Lugonia and had a house built by Mr. Lynn, a local builder. In 1902 the Clarks sold this home to Dr. Charles S. Lombard, who had come from Upper Michigan, for $6000. The home has been owned by members of the Lombard family since then. The Lombards had owned orange groves and also owned some of the land in the downtown area of Redlands.

The Queen Anne style, two-story, polygonal-shaped house was con¬structed of wood and was designed with three distinctive gables, second floor balustrades, and a delightful French window. Placed on a cut-stone foundation, and surrounded by a low cut-stone wall, the .house also claims a wraparound porch, columns, and turned newell posts. A good example of a Queen Anne house with only minor alterations, it is one of the last survivors of Victorian era homes on The Terrace, one of the earliest residential areas in Redlands. It is being restored and preserved by the present owners, Mr. and Mrs. Winthrop Lombard.