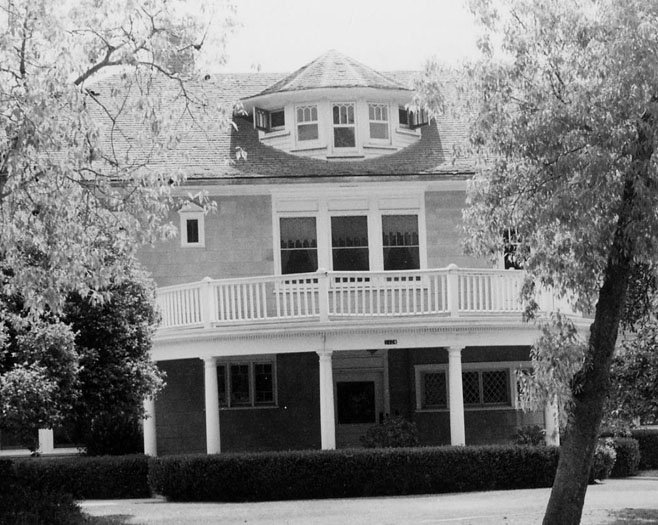 Walter C. Nordhoff, a member of a distinguished business and literary family, built this home when he moved to Redlands in 1899. His son, Charles, was co-author of the trilogy Mutiny on the Bounty, Pitcairn Island, and Men Against the Sea. The family lived in the home until 1919.

At the time of construction, the home cost $15,000 which included the barn. A great controversy arose when Mr. Nordhoff began building the rock walls around the home. At that time the City of Redlands had an ordinance against the building of rock walls, but Nordhoff argued that the wall would cut down the noise of the passing “electrics” on Cedar Avenue. Finally a compromise was reached when the city recognized that the wall wasn’t a wall but a terrace for climbing roses.

The home itself is a 2-1/2 story late Victorian with a shingle roof and asbestos siding (added later). A prominent feature of the home is the central semi-circular porch at the entry. The upper portion of the porch is supported by Doric columns and is enclosed by a railing.
The roof of the structure is a bellcast hip style with plain eaves treat¬ment. The roofline is punctuated by a large bay window with five windows. The windows on the upper sash are leaded as are those of the upper sash of the second story windows. All have plain continuous lugsills.

In 1919 the home was purchased by W.R. Severance, an orange grower and a member of a prominent eastern family. Subsequent owners were of more than ordinary interest: Mrs. Warner was a trainer of police dogs; “Dr.” Martin represented himself as a second Dr. Mayo, but proved to be without a medical degree; and Mr. W.H. Kilpatrick, a colorful as well as highly successful railroad construction engineer, numbered Indian Chiefs among his personal friends.

The home is presently owned by Dr. and Mrs. Malcolm Heppenstall.