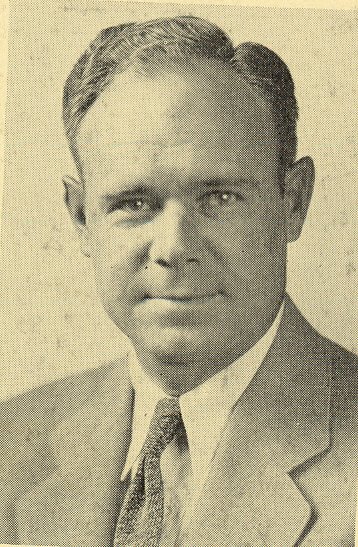 DR. CHARLES J. CLOCK, prominent young physician of the city, was born in Latti­mer, Iowa, on January 7, 1900. When he was six months old, his family returned to Redlands where his father, Fred H. Clock, was already a well-known figure in public life. “Pat,” as he is familiarly known, attended Crafton school, went to Los Angeles and fin­ished grammar school there. During the San Francisco exposition of 1915, he worked in that city as door boy in a cafe. In 1916, he was about to leave for China on a transport when he received a wire from his father tell­ing him to come back to Redlands and go to high school.

This he did, but on March 29, 1917, six weeks before the United States entered the World war he enlisted in the Seventh Cali­fornia National Guard. He was sent to Ar­cadia, inducted into the regular army and transferred to North Island Aviation School, San Diego, for guard duty. Following that, he spent a year at Camp Kearney.

In July, 1918, he went overseas. After many months in a training camp in central France, he was sent to the front in reserve during the St. Mihiel drive. The war ended and he was discharged at Camp Kearney in April, 1919. He worked for some time in the. Southwest­ern shipyards in Long Beach, returned to Redlands, re-entered high school and was graduated in 1921. He entered the Univer­sity of Redlands, quit in 1922, went to Im­perial valley and worked on a ranch for a year. Later, he was employed by the Stand­ard Oil Co. in El Segundo and by the Vesu­vius Oil Co. in Hollywood.

Deciding to become a doctor, he returned to U. of R. and took pre-medical work, 1926 and 1927, entered the University of Southern California Medical School and was graduated in 1932. Then followed one year as intern in the San Bernardino County hospital. In September, 1933, he opened an office for the practice of medicine in Redlands.

Wood working is his favorite hobby and when he has his new home completed, which is in the process of construction on Sunset drive, he will have a well equipped shop where he may enjoy this work in his leisure time.

His fraternities are Pi Chi (U. of R. local), Kappa Zeta, honorary medical, and Alpha Kappa Kappa, national medical, of which he was president, 1929-30, at U. S. C. Other affiliations include the Elks club, the “R” club of the university, the American Legion, Vet­erans of Foreign Wars, Kiwanis and the Red­lands Country Club.

He is a member and trustee of the First Baptist church.