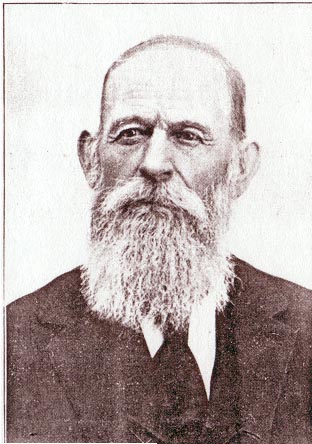 One of the earliest men to settle in Redlands was Simeon Cook, who was born in Richmond, N.H., April 14, 1821.  He passed his boyhood upon a farm and attended the public schools in Richmond and private schools at Winchester and Swansea.  His education was completed in the academy at Amherst.  At the age of 20 years he became a clerk in a store in Boston, and subsequently in Waltham, Mass.  Returning to Boston, he engaged in the grocery business, but sold out after three years’ experience.  He then went back to his native town, and for ten years “conducted a country store.”  He quite this business to engage in the manufacture of hogsheads for the Cuban trade.

Removing to Ashburnham, Mass., he continued the business in partnership with his brother there and also at Keene, N.H.  In 1856 they established another factory in Troy, N.Y., and in that city in March, 1857, he was married to Miss Ellen Murdock, a native of Keene, N.H.  In 1860 he settled in Ontario, Canada, where he made lumber and was engaged in other business.  In 1881 he came to California, and after a short stop at Riverside came to Redlands and purchased his present home property.  Soon after his arrival he put up a frame building for Messrs. Judson & Brown, which he for one year occupied, and ran as a boarding house.  This building was subsequently removed nearer the brow of the hill, was remodeled and opened by Mrs. Seymour as the Prospect House.  He then began the improvement of his own valuable property, setting out several acres to grapevines and orange trees, and planting liberally of deciduous trees.  He has six children, five boys and one girl, two of the boys now residing in Redlands.