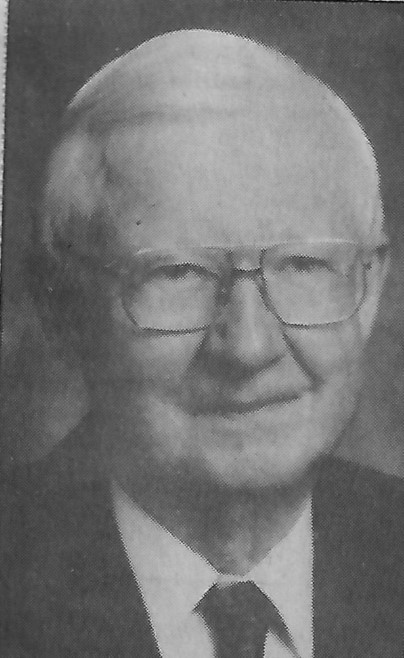 REDLANDS – Frank E. Moore, former editor of the Redlands Daily Facts, author and historian, died at home Saturday afternoon of lymphoma. He was 84. Moore was a third-generation member of the family who owned and published the Daily Facts for 86 years. His grandfather, Capt. William G. Moore,  purchased the fledgling paper in 1895. Frank was editor and co-owner with his brother, Bill Moore, of the Daily Facts from the death of their father, Paul Moore, in 1942, until they sold the newspaper to the Donrey Media Group, of Fort Smith, Ark., in 1981.

In retirement, between the ages of 73 and 83, Moore wrote four books, including his most popular, “Redlands, Our Town,” and “With a Grain of Salt,” containing 124 of the 12,000 columns he wrote under a joint byline with Bill Moore during a period of 44 years for the Daily Facts. His last book was “Redlands Astride the Freeway,” published last year. 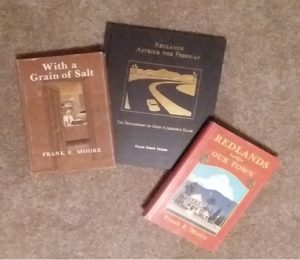 
A tremendous supporter of the University of Redlands, Moore was elected to three three-year terms on the board of trustees. During a period of 16 years, he and his wife Sidney, contributed $600,000 to the school. Of this, nearly $400,000 was devoted to computerizing the major functions of the Armacost Library. Most recently Frank and his son, Roger, donated a gift to the university to build the Moore laboratory for Computational Chemistry in the university’s planned Hedco Biology and Chemistry Building. As editor of the Facts, Moore was most respected for his impartial analyses of ballot measures, election after election.

As a local historian, Moore wrote books and columns and made countless speeches. He appears as a narrator in the Redlands centennial video, “The First Hundred Years.” For the city’s project to inventory 1,500 older houses, he critiqued the first drafts of the individual inventories.

For the Kimberly Shirk Association, of which Moore had been director and treasurer, he made two invaluable contributions. According to Kimberly Crest executive director, Steve Spiller, Moore was a prime mover in inducing Mary Kimberly Shirk to make a $1 million endowment to save the Kimberly Crest house and gardens for public enjoyment. In addition, Moore exhumed the lost history of Cornelia Hill, who built the picturesque chateau and made it a gem by selecting the optimum site and hiring the most qualified building architects and the best landscape architect in the region.

Taking the beautification of Redlands seriously, Moore single-handedly created the Simonds Parkway on uppermost Garden Street on behalf of the principal sponsors, James and Priscilla Simonds. He also contributed nearly half of the cost. Again, in 1995, when adequate funds did not appear available to replace the city’s decaying century old Liberty Pole, Moore contributed $17,000 toward the current 120-foot pole. 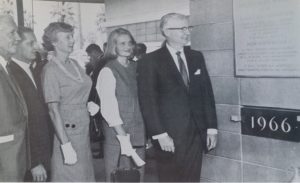 The Moore Family at the dedication of Moore Middle School

Moore, who as an editor steadfastly interpreted the Air Force and nearby Norton Air Force Base to Redlands readers, was cited by the Air Force Association – local, state, and national. The Military Airlift Command designated him a Distinguished Citizen.

Born in Redlands, March 12, 1912, Moore was a lifelong resident. He attended Kingsbury elementary, Redlands Junior High and Redlands High schools. After graduation from RHS in 1930, he attended the University of Redlands for his freshman year. Then he transferred to Stanford where he graduated in 1934. A political science major, he was keenly interested in government for the rest of his life.

He attended both Democratic and Republican National conventions as a reporter. Likewise, he was a Facts reporter during the opening and closing sessions of the United Nations charter-writing conference in San Francisco. 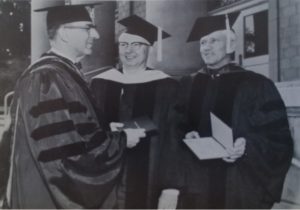 Moore is survived by his wife, Sidney; two sons Roger, of Toronto, and Jeffrey, of San Jose; and one daughter, Francie, of Lima, Peru.