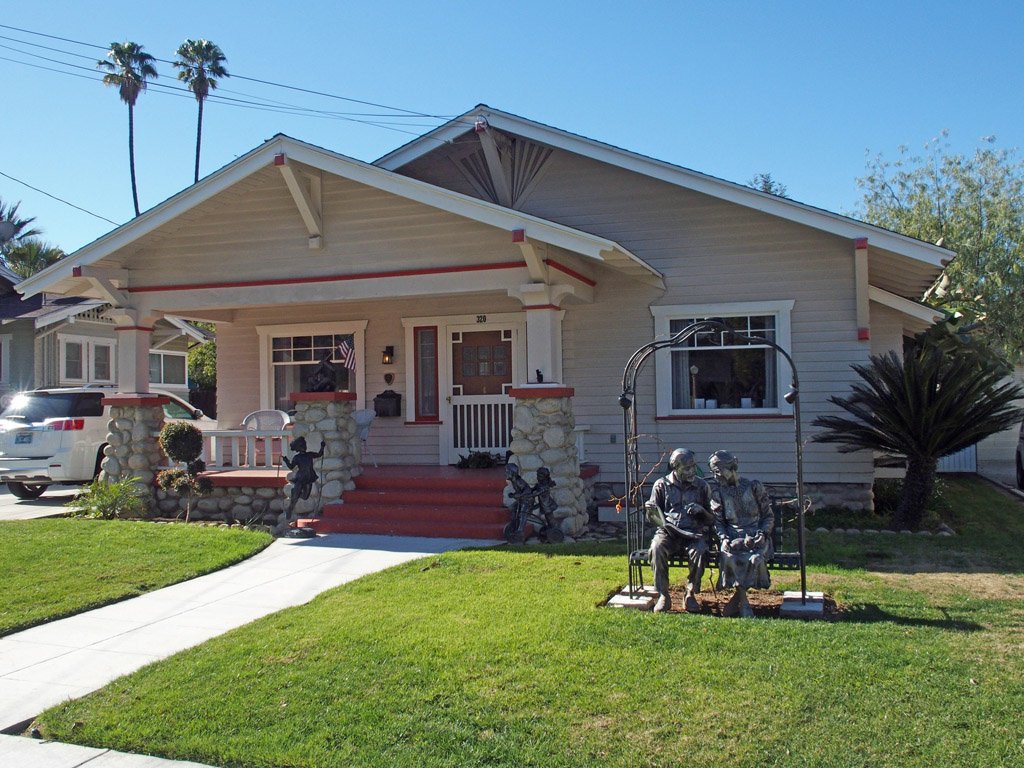 The Ferryman bungalow is one and a half stories and has craftsman features: exposed rafters on the south and north sides and large support brackets as seen on the double front gables. A building permit dated April 16, 1912 states: owner B.B. Ferryman for the purpose of new construction, a framed bungalow, builder: E.E. Watson, cost $2300.

Mr. Ferryman, a native of lllinois, lived in Redlands for forty-two years. For many years, he was one of the leading plumbers in Redlands, owning the plumbing shop on Central Avenue. He passed away on February 2, 1947 in San Bernardino following a lingering illness. He had two wives, Savilla and Ida A.

The attractive cement porch has a plain frieze at the top and is supported by two decorative posts. There are three porch piers of rock, of which the center pier is missing a post. The stick balustrade is on the east, south and north sides of the porch. The porch foundation is of rock, but the house foundation is of cutstone. The centered front door is solid wood with six square panes at the top. Glass sidelights are on either side of the door and open inward. The south ease and northeast portions of the building have large fixed windows with eight rectangular panes at the top.

About 1931 the Ferryman’s moved from the house and sold the property in 1944 to Edith G. Demond. Edith was head of the reference department at Smiley Library. Her parents lived with her. Her father was a mining engineer. His name was Charles and her mother’s name was Margaret. There were about three other owners until the Swanstons purchased the home in September of 1970. The beauty of Redlands and the many older homes were the reasons Crain and Nancy Swanston moved from Riverside to Redlands. Having two small sons, they wanted a neighborhood that was suitable to raising young children. Also, they needed a home that was close to schools. They fell in love with 320 Buena Vista and the neighborhood, which remains stable to this day. The Swanstons added a retaining wall in the basement and an addition to the back of their home. Like most old-house owners they spent hours taking off layers of wallpaper, six in some places, and repairing the plastering.

The Historical Society is pleased to present this Heritage Award to Craig and Nancy Swanston and are happy they decided to move to Redlands and make it their home.