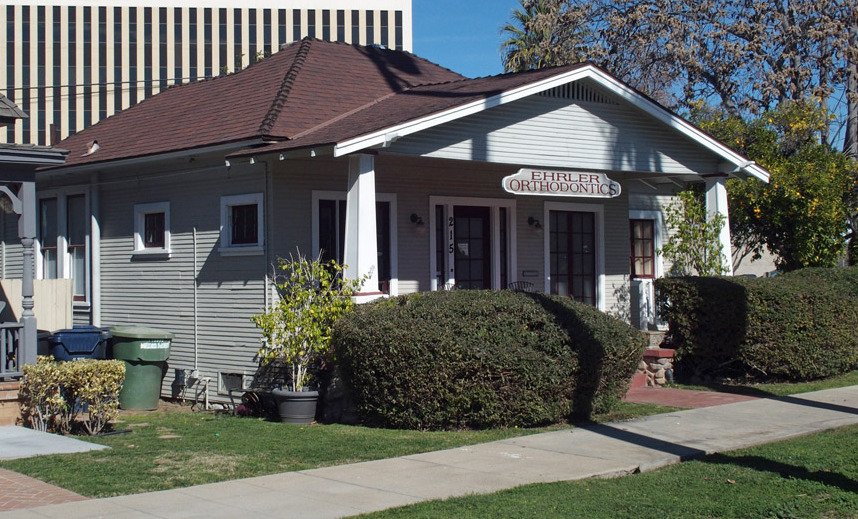 215 East Olive Avenue is representative of a venacular style of architecture. Simple in design, this one-story bungalow could have easily been found in the pages of the Sears catalogue.

The April, 2 1904 Redlands Citrograph indicated the first owner was C. C. Barrett. The 750-square foot home was constructed for the surprisingly small sum of $225. Built in a slight -L- shape, the home was clapboard siding with a fieldstone foundation. Across the front and east side are low gables, the front supported by elephantine rock piers. A pleasing sunburst pattern has been incorporated into the gables.

The house has had several owners since 1904. Barrett lived there only a short time. It was owned by Redlands Police Lt. Elmer Robinson in 1941 when Mrs. Bessie Simms purchased the house. She moved in December 4, 1941-­three days before Pearl Harbor. For the next 37 years it remained her home. She made several improvements, including enclosing the screened porch on the east. The garden, always her favorite, abounded with roses, pink carnations and violets.

Since 1981 this bungalow has been the office of Vura-Weis. Located in a transitional neighborhood where many of the historic homes have been destroyed, it is an excellent example of a successful adaptive reuse. Even the interior retains the original intent and design, including the built-in bookcases, hardwood floors, and the delightful sunporch.