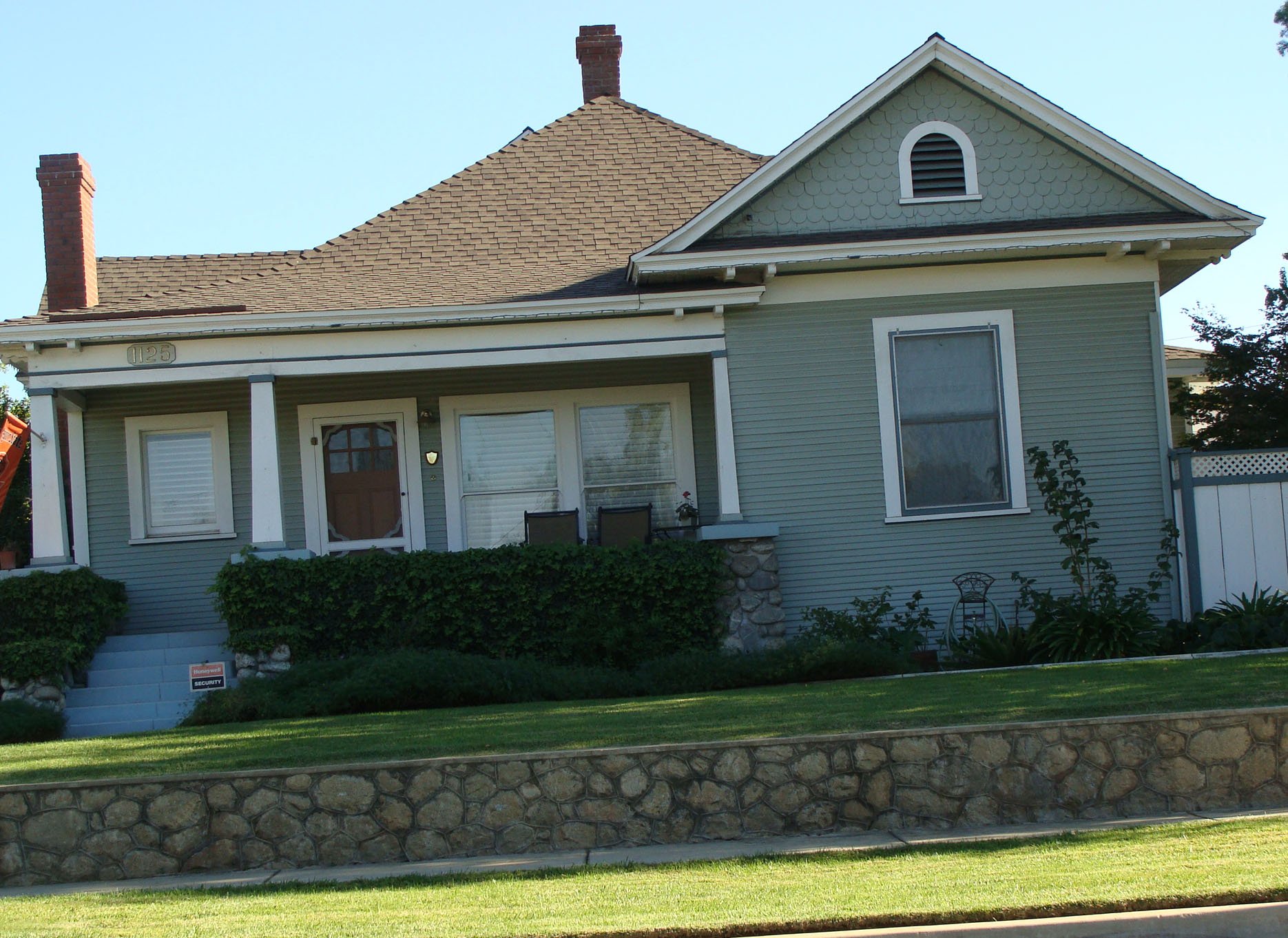 The bungalow at 1125 West Olive has proven itself to be a survivor. It was slated for demolition in 1976 and the land was to be incorporated into a new subdivision. The bulldozer was in place and had already destroyed part of one of the stone retaining walls on the property when the structure was saved from demolition by the efforts of Ed Hales, member of the Planning Commission, who advocated its preservation.

J. C. Beer was contracted by Dr. Neil R. and Ella F. Macalaster to build this one-story wooden-frame bungalow. According to the “Application for Building Permit,” dated November 3, 1905, the structure was to cost $2400 on lots 3 and 4 of the Nebraska tract. Also, a permit was taken out for the, construction of a two-story barn to be built by the owners on the property. The barn was demolished when the property was subdivided.

This one-story bungalow was constructed with an internal wooden frame and covered with clapboard siding. It has a front-gabled roof on the north side, which is repeated on the east side of the house. The overhanging gables have fishscale shingles and slated vents. At intervals along the roofline there are decorative false braces. The main entrance, facing Olive Avenue, has a covered porch, extending partially across the front of the house. The roof of the porch is supported by stone piers with wooden tapered posts. The porch railing and banisters along the concrete steps are constructed with stone. On the east side of the house there is a bay window and a side entrance. Over this entrance is a wooden beam porch cover, supported by stone piers with wooden tapered posts to match the ones on the front. Other important features of the property include a stone retaining wall along the north and east sides of the property. Alterations were made to the structure around 1920 and in 1976, which have not destroyed the historic fabric of the structure.

After the structure was completed the Macalasters resided there until sometime around 1920. Dr. Macalaster was a local dentist and may have had his office at his home. There were several short-term occupants at this address from 1920 until 1924. These included Charles Wattawa, Karl F. and Maria Schmidt, and F. N. High. In 1924 Ernest and Marion Scholton, along with their daughter Dorothy moved to this address (1105 W. Olive). Their son Robert Scholton, now a retired teacher, was born and raised there. Ernest Scholton was listed as a citrus grower and rancher in the Redlands City Directory. The Scholton family occupied the home until 1976.

The present-day owners, Cindy and Larry Munz purchased the home in October 1984. They have shown interest and concern for the property and have been actively researching its history. Their plans include continued restoration of the home and property. One project is to replace the destroyed stone retaining wall on the east side of the property.