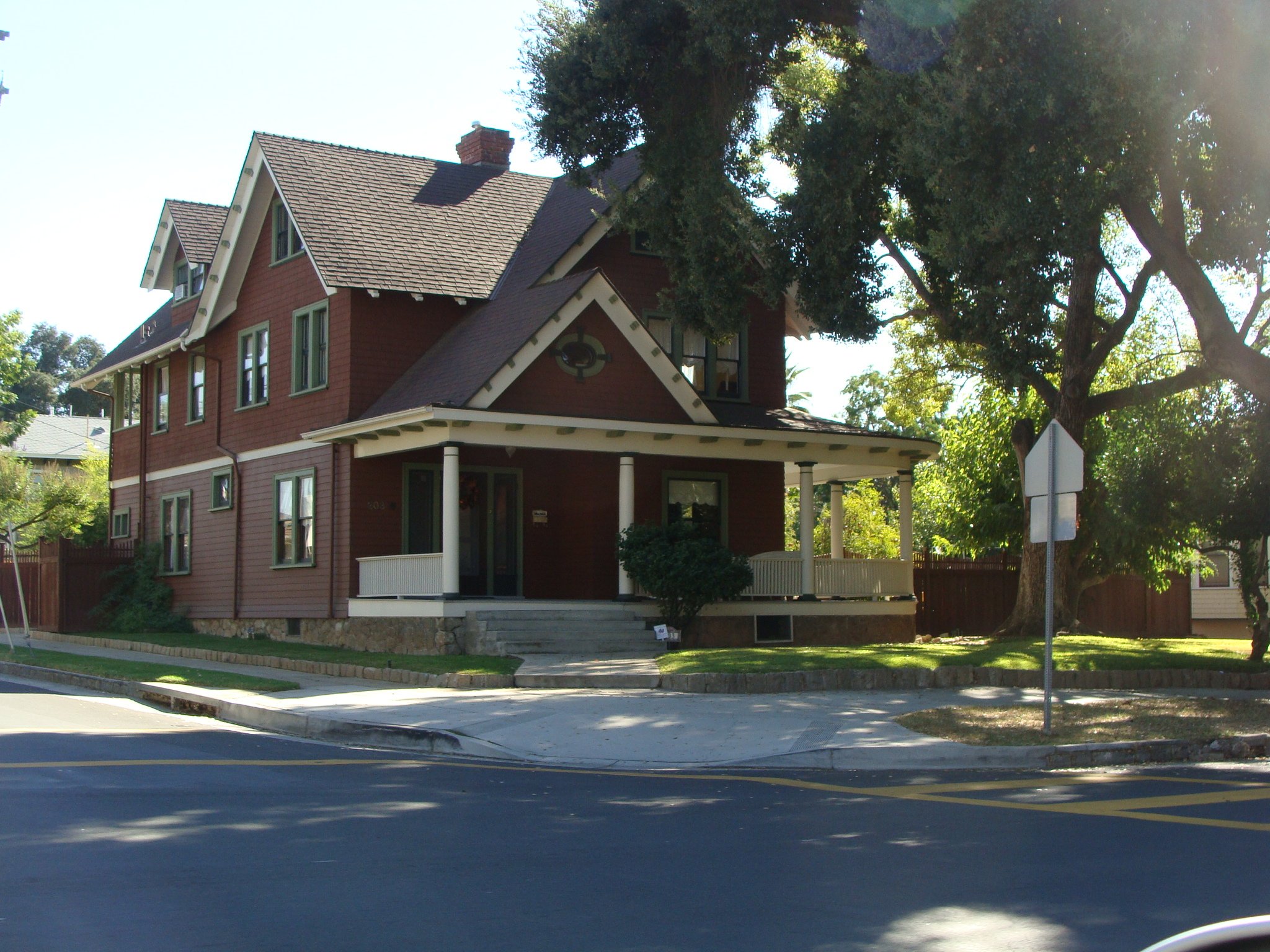 Local contractor, D.M. Donald, built this two-story Victorian style house in 1906. The roof is a high gable and the siding is oil stained wood shingles on the second story and shiplap on the first. Two gables face north. The lower gable has an elliptical decorative window and the facer boards on this gable have dental decorations. The upper gable contains a two-sash window on the top with a three-sash window below. Above the wooden porch, the cornices are boxed with decorative brackets attached to the surface. Six columns support the porch that wraps around to the west side of the house. A stick balustrade is above the cutstone foundation. The front door is located in the northeast comer of the house and to the west is a large double hung window. On the east and west sides are high gables with a two-sash window.

The original owner of the property was Charles E. Owens. He and his brother built a small house on the property in 1886. He was born in Missouri and made his fortune in gold mining, cattle and other enterprises. He died at Patton Hospital in 1909. March 12, 1906, the Redlands Daily Facts announced that a Charles A. Wood was constructing a house on the southwest comer of was Olive and Eureka. It was to be a nine-room, two-story frame house with a basement and attic. The cost would be $6000.

Charles Wood was a retired businessman from Altoona, Pennsylvania. The Catholic Church and others in the area were pleased to have this beautiful home replace a smaller shack. To quote a survey form in Smiley Library: “Wood greatly relieved the Sacred Heart congregation by removing the small shack inhabited by the “Shakers” congregation …since 1896 the Catholics and the Shakers had a running feud concerning noise on Sunday mornings during services.” In 1913, the property transferred to the Dague family. Lee Dague was secretary for the Elks Club, Miss Lena was office manager for gold Banner Association, Madie was a bookkeeper for Home Investment, and Margaret was a widow. Later, other Dagues were listed: Mrs. Emma, (cashier for Southern California Edison), E. Catherine, (secretary BPOE), Blanch, (orange grader), and also Jessie and Jennie. Directories show the Dagues moved in 1929, but returned in 1936. By 1965, Arthur E. and Wanda Buyak were living in the house.

The present owner, Patricia Larson, moved into the house in September of 1980. Her husband was in the Air Force and was transferred to Norton Air Force Base. She was born in Minnesota and Redlands seemed like going back home with its old homes and wide streets. With six children, they needed a large house. She especially dreamed of having a home with hollyhocks in the backyard. This house has a large backyard with hollyhocks. They spent three and a half months restoring the first floor, sanding the wood and wood floors, and putting in new wiring, and plumbing. They also replaced the roof and removed the John Manville asbestos siding that was added to the house in 1948. They finished their remodeling two days before Christmas.

The Redlands Area Historical Society wants to thank Patricia Larson for her love and care of this historical home by bestowing on her this Heritage Award.