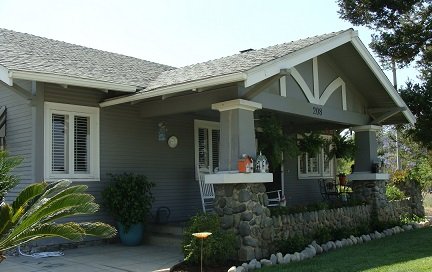 In 1915, areas in west Redlands were outside the city limits, including Bellevue Road once named Railroad. City directories identified Bellevue as from “900 West Fern Avenue northwest to Alabama.” It would take another ten years for the houses on the street dominated by orange groves to receive numbered designations. Documenting the history of the homes on Bellevue provides perplexing challenges as the houses were renumbered at least twice and perhaps, even three times. The incorporation into the city, lack of consistency in the directories, and other discrepancies in the records further “muddies the waters.” The home of Ohio native Miss Elizabeth Weaver was identified as located “Bellevue Rd 1 south of Olive.” In 1925 the directory listed the house as 308 Bellevue. The designation changed to 208 Bellevue sometime in the early 1940s.

The first known public notice of Elizabeth Weaver’s house was in the Redlands Review of June 25, 1912, stating that Elizabeth Weaver, landscape painter to build on corner of West Olive & Bellevue. Additional notices published in 1913 and 1914 indicated that a $10,000 nine room house was to be built by Garrett Huizing. The completed home, based on the initial reports in the local newspaper was scaled down. The original building permit was not located. Examples of similar houses by the prolific Redlands builder are found on Linda Place, Eureka, Buena Vista, and Cajon Streets, as well as areas near the University of Redlands, including Campus, College, Brockton, and North University streets.

The Weaver home is a classic Huizing built home. A traditional one story bungalow with ship lap siding, the house has a cross gabled roof and a large gable overhang with exposed rafters supported by two river rock stone piers and tapered wood pedestals. The rock piers are part of uniformed rockwork across the porch front that includes a planter on one end, another distinctive Huizing touch. A concrete walkway on the left is tied into a traditional Redlands granite cut stone wall at the front of the property. The large gabled covered partial width porch provides extraordinary vistas to the east of Mount San Bernardino and Mount San Gorgonio and the perfect opportunity to experience “the purple snowcapped mountains reaching the clear blue sky.” Painted a gray with white trim, the white effectively defines the bungalow features, including exposed rafters, triangular braced supports, and the design inset in the main gable repeated in a silhouette form in the side vents. To the right of the paneled and glazed front door is a four-pane wood rectangular window divided vertically, and to the left of the door are two identical vertically divided two-pane windows. In the back of the house is a stone and brick barbeque and a small guest house, the latter most likely built in the 1930s or 1940s.

Although the article in the Redlands Review stated Weaver was a landscape artist, census and voter registration records listed Weaver’s occupation as rancher or fruit farmer. She lived in the home for 25 years until her death in January 1940. Other residents of 208 Bellevue included Clark and Mildred Collins (late 1940s) and in the 1950s Robert and Lillian Rhein and Phillip and Helen Vogt. Robert worked as a salesman in a feed store, although the city directories from the couple’s former home of New Haven, Connecticut, list Robert as a saxophone repairman. Collins and Vogt are identified as orange growers.

For over 50 years the home has remained in the care of one family. The property once surrounded by groves was purchased in 1958 by William (Homer) Capehart and his wife Augusta. The couple left their home in Oklahoma at the height of the Great Depression and settled in Arizona. After living in Arizona for several years, they moved to Redlands in 1944. Homer with his son, “Sonny” formed Capehart and Son, caring for over 700 acres of citrus, including their own trees. Homer died in 1969. Augusta drove a tractor, worked in the Gold Banner packing house, maintained financial records, and cheered on the Los Angeles Lakers. The family’s matriarch passed away in 2006. The likelihood of the house being sold after her death inspired the current owner Linda Slocum, to purchase her grandparent’s home, ensuring it would stay in the family.

The Redlands Area Historical Society proudly presents a 2012 Heritage Award to Linda Slocum for her hard work and love of her historic Redlands property, as well her family’s 50 plus years of ownership and stewardship of their treasured California Bungalow.