In 1895 H. H. Daniels constructed this seven room house for William McElhose, an orange grower by trade. The cost was $2,000. There is a two story carriage house in the rear with four sets of French windows on the second floor. The house has since undergone many alterations. The McElhose family owned this house until 1919. 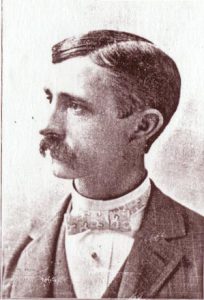 In 1920 L.S. Fletcher, of the Fletcher Planing Mill, bought the house and the Fletcher family remained in it until 1944. The Faxon family then purchased the home in 1944 and owned it until 1946.

The Bard family then purchased the home in 1946. Bard was a liquor store owner in San Bernardino. He suffered a gunshot wound in the head during a robbery and survived. The Bard family sold the residence to Mr. & Mrs. Norman Willis Dick in late 1946. Norman Dick was associated with the California State Highway Department.

The Norman Dick family owned the home until 1972 when the current owners, Joseph John Rania and Mildred Irwin Dick Rania, became the new owners. Mr. Rania is a retired Coastguardsman and Welfare Supervisor.