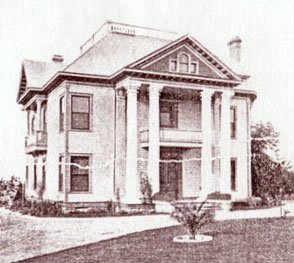 Charles French built several homes in Redlands and notably an Italianate style home in Crafton on East Citrus Avenue. He was primarily a citrus grower but built homes as a sideline. He designed the floor plan of the home and drew the plans himself. John Fisher and Henry Fisher bought this home in 1896. Henry built a home for himself in 1897 on Highland Avenue. Henry Fisher started one of the first oil companies in the United States. It was the oldest operating company in 1890 when the Fishers moved to Redlands. The Fisher family was instrumental in hydroelectric endeavors in Southern California.

The home was constructed in 1894 by D.M. Donald and Son for $10,000. The porch was an addition completed in 1895 for a cost of $2,500. The home has thirteen rooms finished in alpine plaster. The architectural style is Greek Revival or Colonial Southern Mansion. The house is built on the corner facing directly south.

The lofty, Corinthian columns of the old Colonial portico support a porch on the second floor. There are also cozy little porches, outside of the second-story rooms, on the east and west sides of the house. A Greek pediment crowns the entrance of the home with a single Romanesque window centering in the pediment. The roof, side porches and front second-floor porch are graced with a Greek balustrade. Italian brackets are found under the eaves and within the pediments.

The original interior had oak fire mantels, gas heaters with tile facings. Across the hallway is the parlor, with sliding doors into the library, on the north. The floors are all inlaid and bordered with beautiful patterns in wood mosaic, the borders raised so that the center rug is on a level with them, and all are different in design. The mantels are various fine woods, and the fireplaces are surrounded by softly tinted tiles. The front room on the second floor had a skylight.

The home was owned by the Dr. McCarty family at the time of the award.