This classic box-styled residence has a wrap-around front porch with square pillars and railings. On the east side is a large two-story bay with diamond faceted shingles. Sitting on a cut-stone foundation, the home exterior consists exclusively of shingle siding. 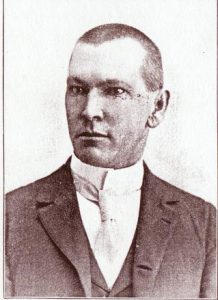 John and Jennie H. Wilson lived here from 1902 until 1910. They came to Redlands from Maine and he served as cashier of the First National Bank of Redlands and as secretary and treasurer of the Savings Bank of Redlands. The Wilsons were followed by Mrs. M. P. Moll who resided in the home from 1911 until 1917. From 1917 until 1921 the house remained vacant, but it was purchased in 1921 by Mr. and Mrs. Horace E. Pastorius, orange growers, who lived in the home until 1943.

Present owners, John and Susie Jennings purchased the home in 1982 and have supervised its restoration during the past year.