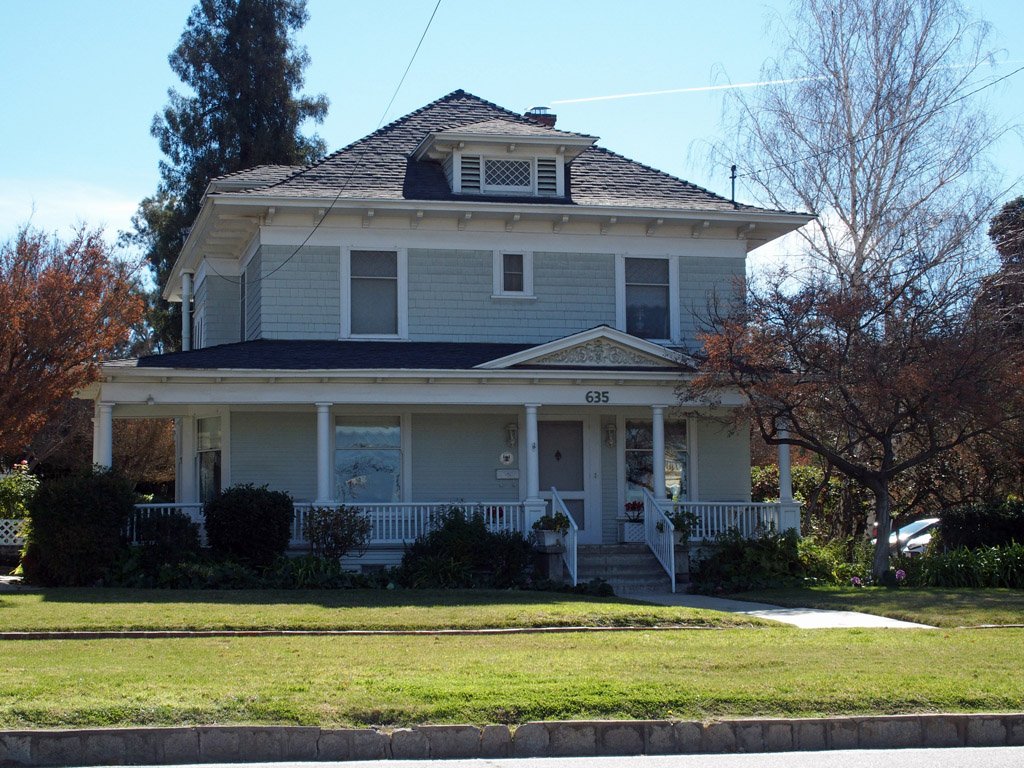 The residence at 635 West Palm Avenue was built by Davis M. Donald for $3,000. He started the building in April, 1904 for Marie Hegardt and her two daughters. The Hegardts were from Michigan and the home was modeled after the home of Mrs. Hegardt’s brother in Deluth. The daughters were both teachers in the local schools and one of them married into the Gaylord family, a pioneer orange growing family in Redlands.

Mrs. Hegardt and her daughters were members of the Palm Avenue Improvement Association. The Association was a neighborhood club that decided what kind of ornamental trees would be planted between palms, kept weeds out of gutters, cleaned up after the prevalent horses, and picked up trash. They acted as a lobby for City Trustee meetings concerning neighborhood issues and several other city streets had similar groups. The home has also been owned by the A.W. King family. Current owners are the William and Joyce Hardy family.

This two story classic-box style house has a medium hipped roof with a center dormer. Brackets under the eaves visually support the roofline on both first and second stories. Six plain columns also support the roof of the open veranda that wraps around the facade of the house and down its east side. The entrance is accentuated by a monumental pediment with decorated frieze. Each side of the home includes a bay window and adding interesting contrast are the siding materials. The first floor incorporates shiplap siding while the second floor is shingled. This classic-box style home was very popular in Redlands during this period and contrasts to the flamboyance of the earlier Queen Anne style.

The Redlands Area Historical Society is proud to honor this example of Redlands’ heritage and to commend the stewardship of the present owners.