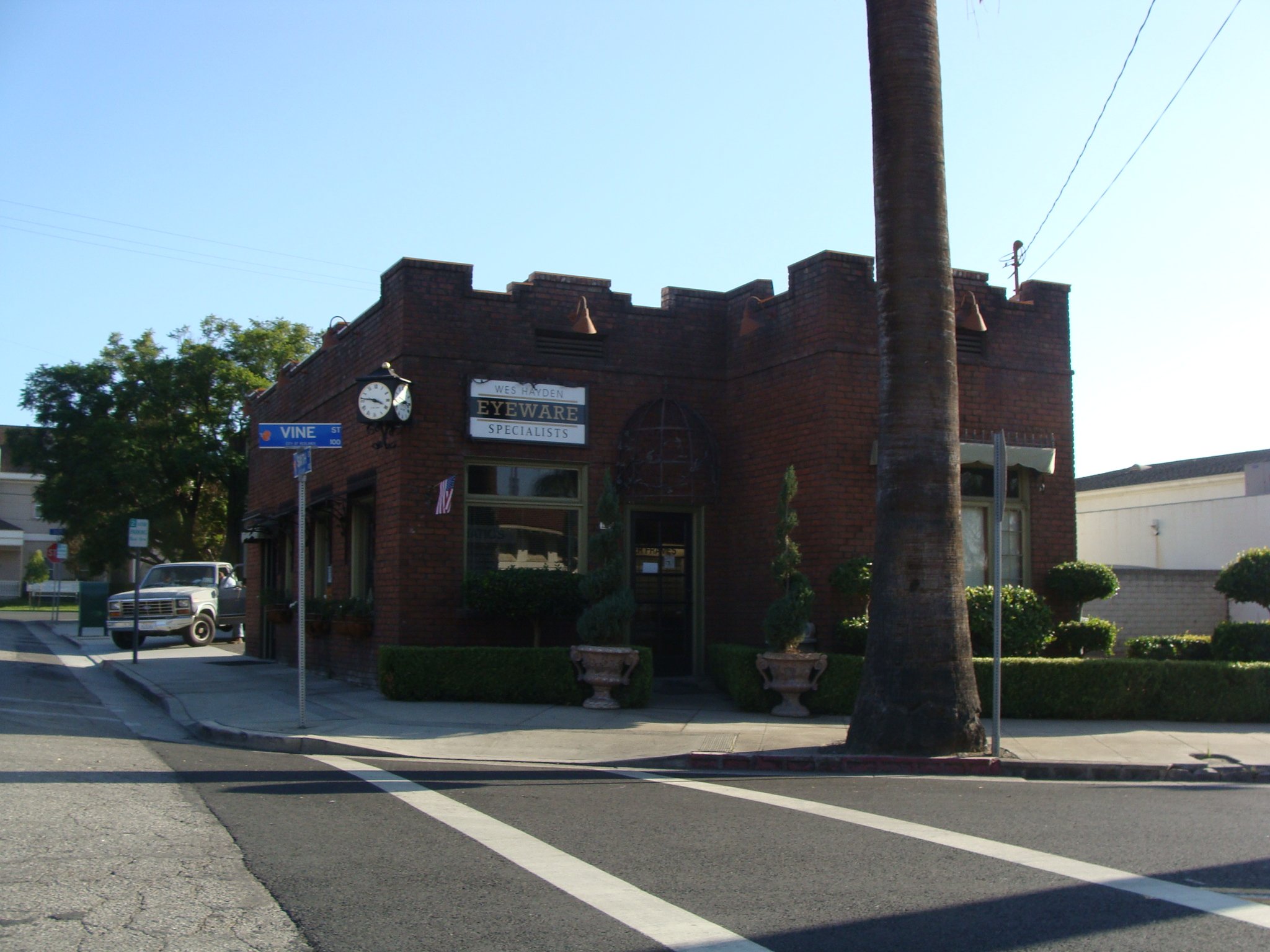 Standing at 150 East Vine near Sixth is a small, unimposing vine-covered commercial building. Owned today by Mrs. Diane and Mr. Harrison Lightfoot, the building now occupied by the Redlands Copy Center reminds us of a time when Redlands business was generally conducted out of buildings such as these. The building is constructed entirely of red brick. Double¬hung, multi-paned windows grace front and sides, and a green glass-paned door beckons the customer to do business within.

Along the roof lines of the building a series of low arches and crests remain to remind the viewer of the building’s early origins. When constructed in 1911, the building was neighbor to another, more imposing, brick structure–Cortner’s Chapel. Cortner’s stood on Olive immediately behind the Vine Street structure. Rather than conflict with its neighbor’s architecture, the architect, S. G. Randall, sought to duplicate it on a smaller scale. In so doing he added a crown of castle-like crenelation, broken by half-moon crests, that matches the roofline of Cortner’s. Most of the original roofline is now long gone but pictures remain to attest to what was once there.

Rumors abound as to the origins and past uses of 150 East Vine. However, early records indicate that the building was commissioned and constructed for use by the Redlands Motorcycle Club. First assembled in April 1911, members of the club raised $3,000 to build the structure as their first club house. A special door was included in the early lay-out of the building to allow members to enter the building with their bikes from Sixth Street. The Club apparently had a short life, as early city directories show no Morotcycle Club at the address after 1913.

The building may be better known to many today as the office of Gordon Donald in the later 1930s and 1940s, and in later years, as the office to his son, Gordon Donald, Jr. The Donalds were well-known builders of many of Redland’s more prominent homes and commercial buildings. Buildings that may have been designed and contracted from the Donald’s Vine Street offices include the 1938 Curtiss wing of Redlands Community Hospital, and the 1945-built Hill Packing House on Seventh Street at the railroad tracks. The Donald Firm was selected as “Outstanding Firm for 1953” by the Redlands Chamber of Commerce.

In yet more recent years, 150 East Vine Street was the first home of the Diane Lightfoot Realty. Mrs. Lightfoot and her company purchased the building as a dilapidated, vermin-infested structure and painstakingly restored it to the condition in which we find it today.